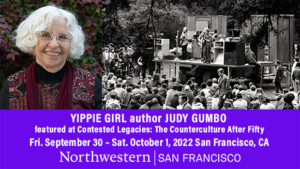 Judy Gumbo, lifelong activist and author of the recently published memoir Yippie Girl, has been invited to appear on the opening, “Journalism,” panel during the upcoming two-day conference  “Contested Legacies: The Counterculture after 50.” The event is being sponsored by Northwestern University’s Center for Civic Engagement, the Northwestern University Library and SF Heritage. It will be held at Northwestern’s facility in San Francisco on Sept. 30 and Oct. 1.

Judy, who worked on the Berkeley Barb andBerkeley Tribe during the 1960s, also was an influential presence in the political theater of the Yippie countercultural group. She will discuss a “revolution within the revolution”—the feminist revolt against women being placed in subservient roles within the allegedly liberated underground press—and the legacy of that important protest, as seen through the window of the #MeToo movement and other contemporary struggles for equity.

The panel will be moderated by Abe Peck, professor emeritus in service at Northwestern University’s Medill School of Journalism—and, like Judy, a one-time Yippie.