This workshop will look at some poems that are a little unconventional. How does this change how we read them? How does it change how we write them? We will look at poems by Jeanann Verlee, e.e. cummings and Zachary Schomburg. Please bring at least one poem you want workshopped, plus copies.

Thomas Fucaloro’s latest book, It Starts From the Belly and Blooms, was published by Three Rooms Press. He is an editor for Greatweather for MEDIA and for Staten Island’s new literary magazine NYSAI. He teaches poetry workshops at the Harlem Children’s Zone, NEON Bronx Probation Center, Writopia Lab, LGBTQ Pride Center and the LouderArts Project. He received his MFA in Creative Writing at the New School. His next book,  Mistakes Disguised as Stars, will be published by Tired Hearts Press. He has been on three slam teams, Intangibles 2012, JC Slam 2013 and LouderARTS 2014, where they placed 12th out of 72 teams in the National Poetry Slam.

This workshop is sponsored by the Bronx Writers’ Center of the Bronx Council on the Arts. 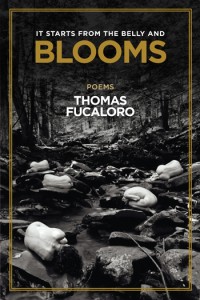 It Starts from the Belly and Blooms, poems by Thomas Fucaloro