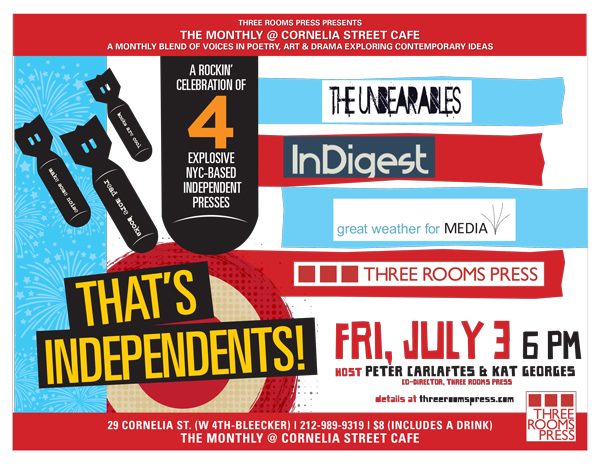 Each of the five publishing companies represented will discuss their publishing ethos—and what sets them apart—then present work by some of their current authors. Presses include: The Unbearables, InDigest, Great Weather for Media, and Three Rooms Press.

Doors open at 5:45. Admission is $8, which includes a free drink. Cornelia Street Cafe is at 29 Cornelia Street, in the West Village, between W. 4th Street at Bleecker (http://corneliastreecafe.com/).

The Unbearables
The UNBEARABLES are a free-floating, in-your-face Autonomous Zone of Dadaists, Noir Humorists and Beer Mystics. They base their actions on the book, TAZ, by Hakim Bey; they liberated the Brooklyn Bridge every September 13th for many years, picketed the New Yorker magazine, decrying the shitty poetry therein, and occupied the New School where they gave a series of anti-seminars. They continue onward with Be-Ins and readings, usually in New York City. (http://unbearables.com)

Great Weather For Media
Founded in January 2012 by former Uphook Press editors Jane Ormerod, Thomas Fucaloro, and Brant Lyon—and later joined by Peter Darrell, George Wallace, and Russ Green—great weather for MEDIA focuses on the unpredictable, the bright, the dark, and the innovative… They are based in New York City and showcase both national and poetry and prose. Recently, they have begun publishing individual poetry collections by fearless, innovative poets including, to date, Aimee Herman, Corrina Bain and Puma Perl. http://greatweatherformedia.com

InDigest
InDigest is an online literary magazine and arts blog focused on creating a dialogue between the arts. While we publish on a quarterly schedule, we update our blog and podcasts regularly. InDigest recognizes that art does not take place in a vacuum and that categories are meaningless. We are interested in work that cannot be classified by genre, in good story-telling in all forms, and in artists whose curiosity drives them to push beyond the conventions of their media. InDigest also presents the InDigest reading series that takes place monthly in New York.
http://indigestmag.com/blog/#.VYwUjL6JnzI

Three Rooms Press
Three Rooms Press, founded in 1993, initially served as a leading independent publisher of poetry, drama and art sourced from the burgeoning spoken word, music and underground art scenes in San Francisco, Los Angeles and New York. Since 2012, it has expanded its mission to publish cutting edge work in fiction, creative historical nonfiction, memoir, photography and art. In 2014, it will expand its line to include children’s books. Books are now offered in print and digital formats, with an emphasis on excellence in content, design and formatting. In addition, TRP produces and promotes a variety of events; since 1992 it has staged hundreds of major cultural events in San Francisco, New York, Los Angeles, Paris, London and more, including readings, plays, writing workshops, seminars, dance and musical events. https://threeroomspress.com