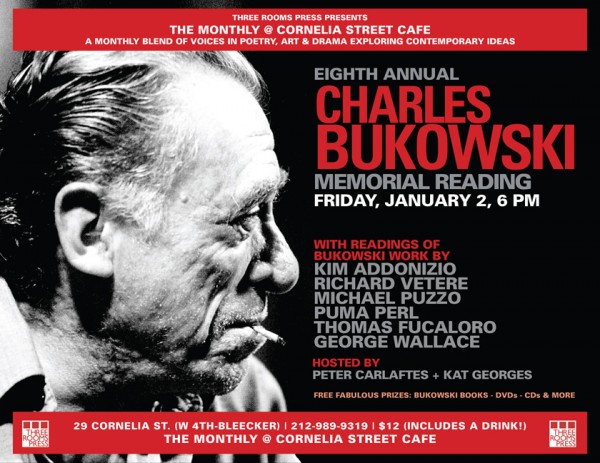 Celebrate the start of the new year with the 8th annual Charles Bukowski Memorial Reading, Jan. 2, 2015, 6pm at Cornelia St. Cafe. Charles Bukowski was truly one of the few and far between: a champion of the outsider, the lost and lonely, the outcasts from society. His work resonates like none other, revealing the core of what it is to be human—sans electronics—counting on nothing, but ready to win, be it with horses, women or writing.
The event, held on the first Friday of the new year since 2008, will feature performances of Bukowski poems and tales by a unique cast of hardcore fans including controversial writer Kim Addonizio (author of Bukowski in a Sundress), playwrights Richard Vetere and Michael Puzzo, poets Thomas Fucaloro, George Wallace and Puma Perl, plus Three Rooms Press co-directors Peter Carlaftes and Kat Georges.
Readers will explore Bukowski’s works with respect to its place in contemporary culture. What would Buk think of police brutality? ebola? global warming? online privacy? So much seems to have changed since his time, but has it really?
Everyone in attendance will have a chance to win a prize: Buk books, CDs, DVDs and other prizes. Plus bring your own favorite Bukowski poem to read — we’ll have a limited open mic for you to share your top choice.
Doors open at 5:45 (for best seating—arrive early!). Admission is $12 which includes (naturally) a free drink! Cornelia Street Cafe is at 29 Cornelia Street, in the West Village, between W. 4th Street at Bleecker (http://corneliastreecafe.com/).
Info and reservations: info@threeroomspress.com.


Kim Addonizio has been called “one of our nation’s most provocative and edgy poets.” Her latest books are Lucifer at the Starlite, a finalist for the Poets Prize and the Northern CA Book Award; and Ordinary Genius: A Guide for the Poet Within, both from W.W. Norton.  Her novel-in-verse, Jimmy & Rita, was recently reissued by Stephen F. Austin State University Press. Kalima Press  published her Selected Poems in Arabic. Addonizio’s honors include a Guggenheim Fellowship, two NEA Fellowships, and Pushcart Prizes for both poetry and the essay. Her collection Tell Me was a National Book Award Finalist. Other books include two novels from Simon & Schuster, Little Beauties and My Dreams Out in the Street. Her new story collection, The Palace of Illusions, materialized courtesy of Counterpoint/Soft Skull in September 2014. Addonizio offers private poetry workshops in Oakland, NYC, and online, and often incorporates her love of blues harmonica into her readings.  www.kimaddonizio.com.
Richard Vetere is an American playwright and screenwriter whose work has received international critical acclaim. His is the author of the play Last Day, and a novel, Baroque, about Caravaggio and the people he painted in Rome. His authored a recent poetry collection, The Other Colors in a Snow Storm. Movies include The Third Miracle (produced by Francis Ford Coppola), How to Go Out on a Date in Queens, and the cult classic, Vigilante. His most recent work includes his highly-praised new novel, THE WRITERS AFTERLIFE (2014, Three Rooms Press) and the forthcoming novel CHAMPAGNE AND COCAINE, due out in Fall 2015.
Michael Puzzo is a writer and actor living in NYC. He has been a LAByrinth Theater Company member since 1997. His critically-acclaimed plays include Spirits of Exit Eleven, The Dirty Talk (nominated for an Innovative Theater Award for best script), Lyric Is Waiting (Irish Repertory Theater), The Horse Shoe King of Jersey City (Aspen Comedy Festival), She Talks To Rainbows (LAByrinth’s Barn Series Reading Festival @ The Public) and #309 (Prithvi Theatre, Mumbai, India). He loves Bukowski!
Puma Perl is a poet, performance artist and curator, founder of DDAY Productions and author of several poetry collections including the recent Retrograde (2014, Great Weather for Media) Ruby True, Knunckle Tattoos and Belinda and Her Friends. She notes, “with Bukowski, you can open any book randomly and find a poem to read.”


Thomas Fucaloro is the author of two full-length poetry collections, including It Starts From the Belly and Blooms and Inheriting Craziness (both Three Rooms Press). He is a founding editor for Great Weather for Media and editor for staten island’s new literary magazine NYSAI. He teaches poetry workshops at the NEON Bronx Probation Center, Writopia Lab, The Acorn Youth Treatment Center and the Staten Island LGBTQ Community Center. He just received his MFA in creative writing from the New School. He has a new chapbook coming out soon through Tired Hearts Press called Mistakes Disguised as Stars.


George Wallace is Writer in Residence at the Walt Whitman Birthplace (2011-present), first poet laureate of Suffolk County NY, author of 28 chapbooks of poetry, and the full-length poetry collections, Poppin’ Johnny and EOS: Abductor of Men (bilingual; Greek and English) (both Three Rooms Press). An adjunct professor of English at Pace University in Manhattan, he is editor of Poetrybay, Poetryvlog, Walt‘s Corner, and co-editor of Great Weather For Media and Long Island Quarterly.
Peter Carlaftes is a New York-based screenwriter, playwright, actor, poet, and editor. He is the author of 12 plays, including a noir treatment of Knut Hamsun’s Hunger, and the celebrity rehab center spoof, Spin-Dry. He has appeared in numerous Off-Broadway productions, including his comic solo performance piece, Lenny Bruce: Dead & Well, as well as Barefoot in the Park and Stephen Adly Guirgis’ Den of Thieves. As an author, Carlaftes has penned three books: A Year on Facebook (humor), Drunkyard Dog and I Fold With The Hand I Was Dealt (poetry) and the play collections and the forthcoming Teatrophy (3 More Plays). He is a co-director of Three Rooms Press.
Kat Georges is a New York-based poet, playwright, performer and designer. In New York since 2003, she has curated poetry readings, performed widely, and written and directed numerous Off-Broadway plays (including Jack Kerouac: Catholic by Larry Myers, and The Old In-and-Out, by Madeline Artenberg and Karen Hildebrand, as well as her own work SCUM: The Valerie Solanas Story, and Art Was Here, a play inspired by Dada predecessor Arthur Cravan). Books include Slow Dance at 120 Beats a Minute, Punk Rock Journal and Our Lady of the Hunger. She is co-director of Three Rooms Press.