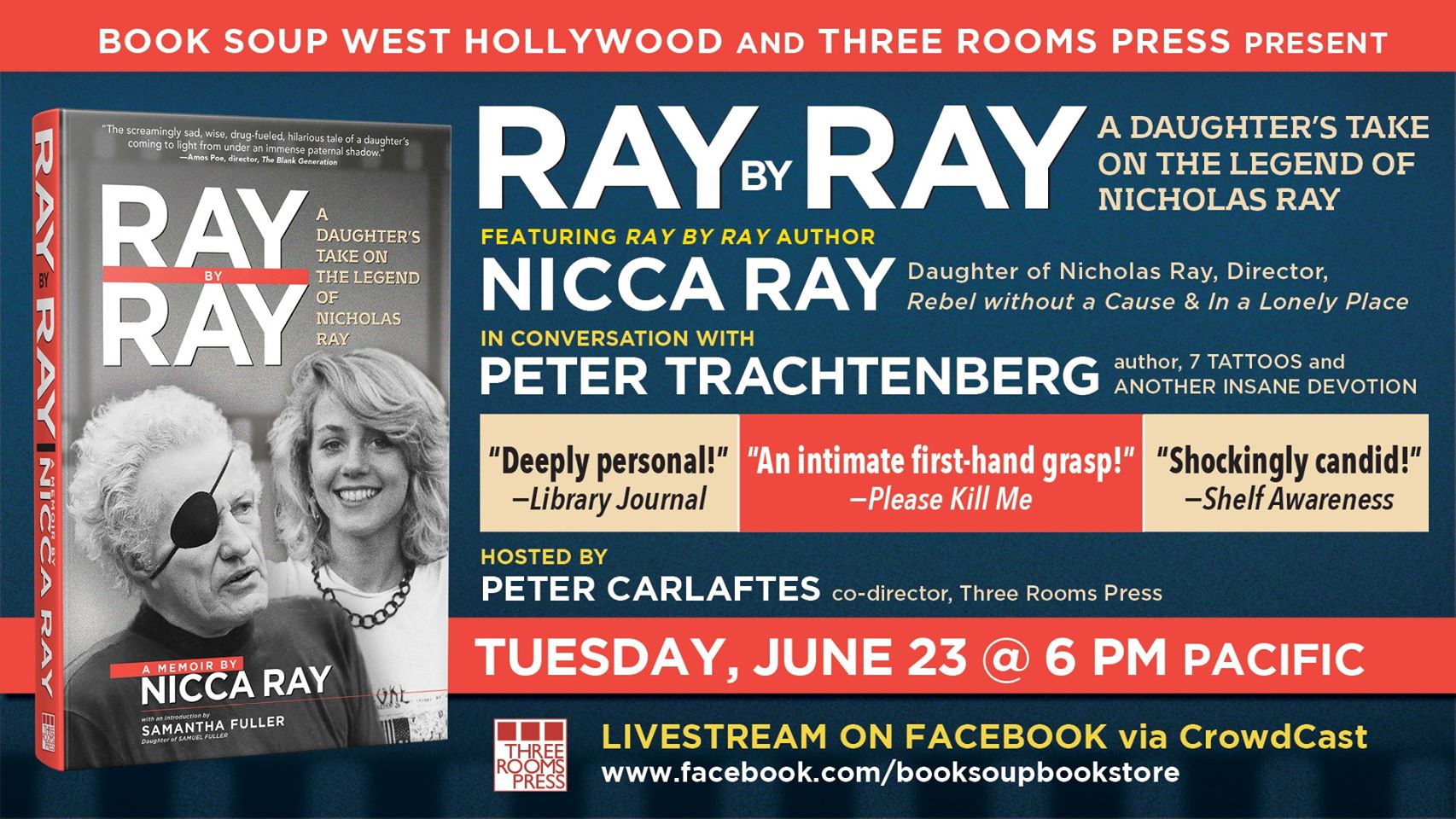 Book Soup and Three Rooms Press present
A Virtual Launch for RAY BY RAY: A Daughter’s Take on the Legend of Nicholas Ray by NICCA RAY
Tuesday, June 23, 6-7 pm Pacific
Featuring
Author NICCA RAY
In Conversation with PETER TRACHTENBERG
Hosted by PETER CARLAFTES
Livestream on Facebook at facebook.com/booksoupstore
Book Soup Bookstore (West Hollywood) and Three Rooms Press are thrilled to present a virtual launch for RAY BY RAY: A Daughter’s Take on the Legend of Nicholas Ray, with reading by author NICCA RAY, daughter of legendary film director Nicholas Ray (Rebel Without A Cause, In a Lonely Place). The event will feature Nicca in conversation with PETER TRACHTENBERG (author, 7 Tattoos and Another Insane Devotion). 3RP co-director PETER CARLAFTES hosts.
The event will be livestreamed on Facebook at the Book Soup page (facebook.com/groups/booksoupbookstore).
ABOUT THE BOOK
In her searing new memoir, RAY BY RAY: A Daughter’s Take on the Legend of Nicholas Ray, Nicca Ray stitches together the seemingly disparate pieces of the real Nicholas Ray—revered director of such classic films as In a Lonely Place and Rebel Without a Cause, so devoted to his craft he insisted on spending the last hours of his life surrounded by a filmcrew. A man with a string of broken marriages and affairs who lost everything to drugs, alcohol, and gambling. An absentee father she longed for connection with.
Inside the book:
• Intimate, explosive, never-before-released details based on extensive interviews with family members;
• 50+ rare photos of Ray and family from the author’s personal archive;
• Personal details of the lasting impact of her father’s legacy
HIGH PRAISE FOR RAY BY RAY
“In this intimate blend of memoir and biography, [Nicholas Ray’s] daughter, Nicca, a filmmaker and writer, explores her father’s complex life and artistic legacy as well as their own complicated relationship and his impact on her life. … This contemplative, deeply personal portrait of both Rays will appeal to readers interested in mid-century Hollywood.” ―Library Journal
“Nicholas Ray invented the meme of teenage anguish. His daughter Nicca lived it. The first miracle is that she survived. The second is that she created this beautiful, heart-breaking book, in which she maps the intersecting arcs of her life and her father’s, creating a dazzling geometry of self-creation and self-destruction.” —Peter Trachtenberg, author of 7 Tattoos and Another Insane Devotion
“The screamingly sad, wise, drug-fueled, and hilarious tale of a daughter’s coming to light from under an immense paternal shadow. … A shadow’s shadow; for Nick Ray is himself a burnt-out case, an artist swallowed whole by the bottle, the spoon and the syringe.” —Amos Poe, director, The Blank Generation
ABOUT THE AUTHOR
NICCA RAY was raised in Los Angeles, not far from where scenes from her father’s most famous film, Rebel Without a Cause, were shot. In her early teen years, she became heavily involved in the L.A. punk scene, and spent a decade mimicking her father through drug and alcohol abuse. After becoming sober in her early twenties, she moved to New York City, where she still lives. At 38, she graduated from New School University, and has spent the years since researching and interviewing friends and family of her father, including Wim Wenders, Dennis Hopper, Norman Lloyd, Tony Ray, and many more. Her research is the basis of RAY BY RAY.