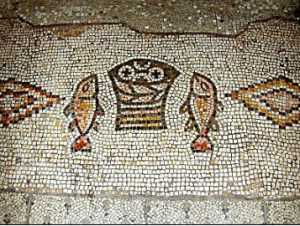 Three Rooms Press hits Berlin for two wild performances as prt of the 2013 CUT International Performance Festival, May 14-20. We join an incredible line up of performers from Europe, Japan, Korea and more — in fact, our first of two totally different performances kicks off the festival on Tuesday, May 14. Full festival details here:http://www.openspace32.de/Cut/Cut_e.php

Three Rooms Press invites people of Berlin to join in as they attempt to recreate the miracle of the seven loaves and a few small fish (or was it five loaves and two fish?). A hungry crowd will gather. Performers Peter Carlaftes and Kat Georges will speak until it starts to become dark in the performance space. Then a disciple or two will recommend that we send the crowd away. Three Rooms Press will reply:

“We have compassion for these people. We do not want to send them away hungry, or they may collapse on the way.”

At that point seven loaves of bread and a few fish will be uncovered. The performers will look up to heaven and give thanks, then, using a knife and fork, they will attempt to feed all who are present with the available bread and fish. All the while the stage lighting will change fromsunset to, by the end of the feast, the last shreds of grey dusk.