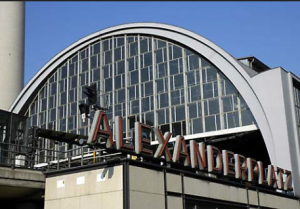 Three Rooms Press hits Berlin next week for two wild performances as prt of the 2013 CUT International Performance Festival, May 14-20. We join an incredible line up of performers from Europe, Japan, Korea and more — in fact, our first of two totally different performances kicks off the festival on Tuesday, May 14. Full festival details here: http://www.openspace32.de/Cut/Cut_e.php

Welcome to The End of Life
Three Rooms Press leads a group of people on a walk through Berlin Alexanderplatz station. After exactly fifteen minutes, a ribbon will be extended across the path of the group, and a banner will be erected which says “End of Life: Grand Opening” (bilingual signage). The “owner” (Peter Carlaftes) will announce that it is time for the grand opening of his new business venture “The End of Life.” Mistress of ceremonies Kat Georges will hand out disposable cameras and will stand with the “owner” for cheesy photos in front of the ribbon and banner. Then, using an oversized pair of scissors, he will cut the ribbon and allow people to enter the end of life. Once they pass by the cut ribbon, they must “die” by laying on the ground. The last person to pass through the cut ribbon will be the “owner”. The mistress of ceremonies will invite those who have not passed through the ribbon to take photos until she yells “Cut!”