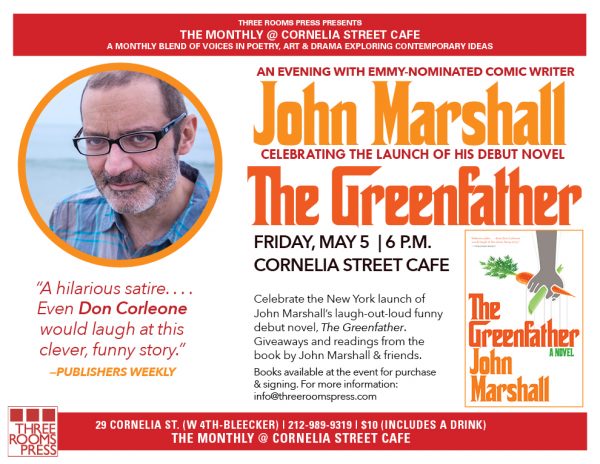 Emmy-nominated television comedy writer JOHN MARSHALL celebrates the release of his hilarious debut novel THE GREENFATHER with a reading at Cornelia Street Cafe on Friday, May 6 at 6 pm.

“An Evening with John Marshall and Friends” will feature the author—who has written for The Chris Rock Show, Politically Incorrect and other late-night comedy—along with his friends from the comedy world, reading from his new book and sharing stories about what inspired it. A book signing follows the reading.

Critics are raving about laugh-out-loud funny THE GREENFATHER. Publishers Weekly called it “a hilarious satire,” adding, “Even Don Corleone would laugh at this clever, funny story.” And the Daily Voice mused, “When it comes to getting people to recycle, should we simply make them an offer they can’t refuse?” Loosely based on The Godfather, THE GREENFATHER showcases Marshall’s comic dialogue, honed year after year in late night television, in the grand tradition of classic mob comedy, like Analyze This and Analyze That. Packed with larger than life goons, right-hand men, Feds and green fanatics, THE GREENFATHER satirizes the environmental movement, crime, families, and crime families.

Copies of THE GREENFATHER will be available for purchase and signing at the event.

John S. Marshall is an Emmy-nominated writer who lives in New York City with his wife Meredith, an actress, photographer, and environmentalist, and Baxter, a Maltese rescue. John has written for The Chris Rock Show, Politically Incorrect, Tough Crowd with Colin Quinn, the remake of The Electric Company, and many other shows. He has also written for Bazooka Joe Comics. THE GREENFATHER is his first novel.