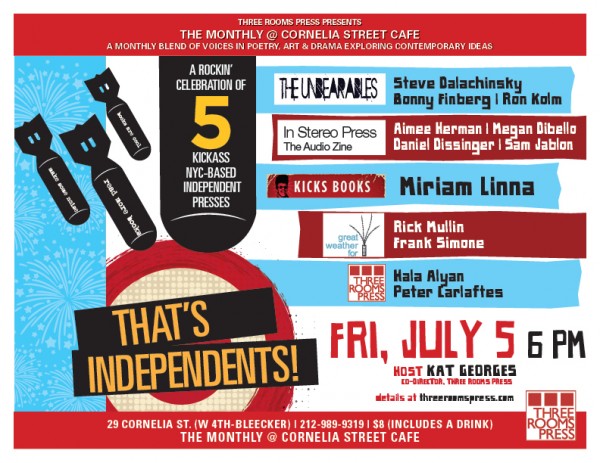 A Celebration of Independent (and we mean “Really Independent”) Presses

The UNBEARABLES are a free-floating, in-your-face Autonomous Zone of Dadaists, Noir Humorists and Beer Mystics. They base their actions of the book, TAZ, by Hakim Bey; they liberated the Brooklyn Bridge every September 13th for many years, picketed the New Yorker magazine, decrying the shitty poetry therein, and occupied the New School where they gave a series of anti-seminars. They continue onward with Be-Ins and readings, usually in New York City , but they have ventured as far abroad as Prague , where they did a series of events in 2011. (http://unbearables.com).

William Burroughs once said of Jack Kerouac, “Kerouac was a writer because he wrote.” We at In Stereo Press would like to add, “…and he was an artist because he made NOISE!” Founded March 2008, in Boulder, Colorado, In Stereo Press is an online zine specializing in undiscovered/new/contemporary writing, music, and visual art.  We encourage every artist to MAKE THEIR VOICE HEARD! http://www.instereopress.com

KICKS BOOKS is an independent publisher based in Brooklyn NY, whose “hip pocket paperback” line reflects the pulp obsessions of founder, Miriam Linna (Norton Records founder and former drummer for The Cramps). A longtime collector of printed matter, and paperback books in particular, Linna fulfilled a promise to a friend by publishing his rehab writings in book form.  SWEETS by rhythm & blues music legend Andre Williams, appeared in 2009 and has been followed by singular offerings by writers Harlan Ellison, Nick Tosches, Sun Ra and Kim Fowley. This summer, Kicks Books will present landmark collections of poetry by British beat hero Royston Ellis and American road poet laureate Charles Plymell. http://nortonrecords.com/kicksbooks/ For this show, Miriam will beat on an old suitcase and recite raunchy early writing of Harlan Ellison.

Founded in January 2012 by former Uphook Press editors Jane Ormerod, Thomas Fucaloro, and Brant Lyon—and later joined by George Wallace and Russ Green—great weather for MEDIA focuses on the unpredictable, the bright, the dark, and the innovative… We are based in New York City and showcase both national and international writers. As well as publishing the highest quality poetry and prose, we organize numerous readings, performances, and book releases in New York City and across the country. http://greatweatherformedia.com

Three Rooms Press, founded in 1993, initially served as a leading independent publisher of poetry, drama and art sourced from the burgeoning spoken word, music and underground art scenes in San Francisco, Los Angeles and New York. Since 2012, it has expanded its mission to publish cutting edge work in fiction, creative historical nonfiction, memoir, photography and art. In 2014, it will expand its line to include children’s books. Books are now offered in print and digital formats, with an emphasis on excellence in content, design and formatting. In addition, TRP produces and promotes a variety of events; since 1992 it has staged hundreds of major cultural events in San Francisco, New York, Los Angeles, Paris, London and more, including readings, plays, writing workshops, seminars, dance and musical events. https://threeroomspress.com. AND This will be a particularly celebratory event, since Hala Alyan’s TRP book, Atrium, was awarded the 2012 Arab American Book Award for Poetry!!! She will be on fiyah!!

It’s general admission, so get there early! Doors open 5:45 pm. Show starts promptly at 6. Totally cheap at $8 which includes a drink. You can’t get a better deal than this for NYC so scrape up your pennies and talk to some really fun people who publish the kind o’ books you love!