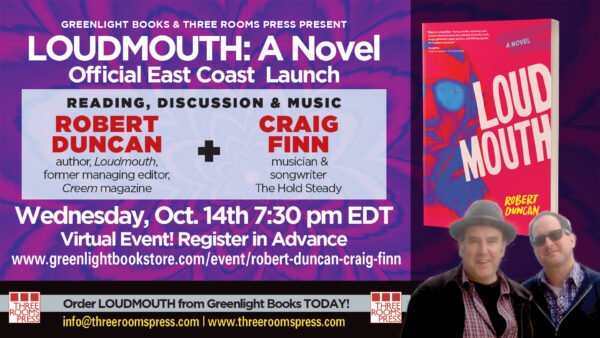 Wednesday, October 14, 7:30 PM ET
Robert Duncan presents Loudmouth
In conversation with Craig Finn
Live via Zoom –Register here:
https://us02web.zoom.us/…/reg…/WN_sKueAL1zSwevIGIOWAm6Dw
Robert Duncan, a former editor of the legendary Creem magazine, presents his debut novel, Loudmouth, the story of an impassioned wannabe out among the hippies, punks, and wild geniuses of rock when music was the center of the world. Raised in a violent, unreconstructed Southern family, Thomas Ransom was not the first of his generation to imagine rock & roll as a way out. But he took it to the extreme, becoming an outrageous singer and, at 21, editor of the magazine that invented punk—before crashing in 1970s New York. Still, it isn’t music that saves him. It’s a soft-spoken painter, who turns out to be the most outrageous character of all. Tom’s memoir-like story recounts adventures with both the famous (Springsteen, The Clash, The Stones, Lester Bangs) and the luminously obscure. With echoes of Almost Famous and Just Kids, Loudmouth is a novel about growing up while falling down. Craig Finn, Minnesota-bred and New York City-based singer/songwriter of The Hold Steady, joins Duncan in conversation for this music-infused virtual book talk.
Click Here to register– https://us02web.zoom.us/…/reg…/WN_sKueAL1zSwevIGIOWAm6Dw