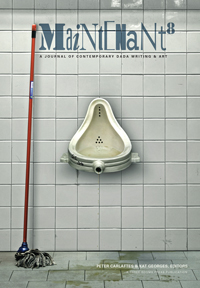 Maintenant 8:
A Journal of Contemporary Dada Writing and Art

Maintenant is an annual journal that features the most significant contemporary dada writing and art from around the world. Inspired by the original Maintenant, an irreverent and risk-taking ‘zine published, edited and allegedly written by Arthur Cravan from 1913-1917, the Three Rooms Press editions aim to bring to light cutting-edge poetry and art that stems from this original spirit. Since 2005, Three Rooms Press’s Maintenant has developed an international reputation as a primary source for Dada work by well-known and emerging artists.