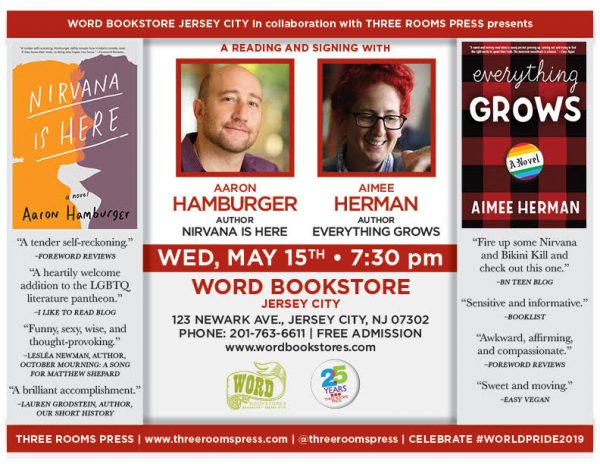 Join author Aimee Herman on tour for her debut Y.A. novel Everything Grows! On May 15th, she’ll be at WORD Bookstore in Jersey City, along with Aaron Hamburger, author of Nirvana Is Here, for a reading/signing.

Fifteen-year-old Eleanor Fromme just chopped off all of her hair. How else should she cope after hearing that her bully, James, just took his own life? When Eleanor’s English teacher suggests students write a letter to a person who would never receive it to get their feelings out, Eleanor chooses James. 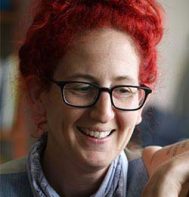 Aimee Herman is a two-time Pushcart Prize-nominated novelist, poet, and performance artist based in Brooklyn, looking to disembowel the architecture of gender and what it means to queer the body. Aimee is the author of two poetry collections, to go without blinking and meant to wake up feeling. Her work has been widely published in the U.S. and internationally in literary journals including Lavender Review, EDUCE, Sous Les Pave, and the Lambda Award-winning anthology Troubling the Line: Trans and Genderqueer Poetry and Poetics. Aimee currently teaches at Bronx Community College. She sings and plays ukelele in the poetryband Hydrogen Junkbox.

ABOUT NIRVANA IS HERE

For Ari Silverman, the past has never really passed. After 20 years, the trauma from a childhood assault resurfaces as he grapples with the fate of his ex-husband, a colleague accused of sexually harassing a student. 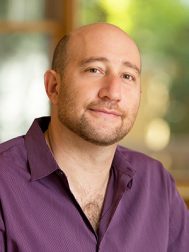 ABOUT AARON HAMBURGER
Aaron Hamburger is the author of a story collection titled The View from Stalin’s Head, winner of the Rome Prize by the American Academy of Arts and Letters and nominee for a Violet Quill Award. His second book, the novel Faith for Beginners, was nominated for a Lambda Literary Award. His writing has appeared in The New York Times, The Washington Post, The Chicago Tribune, O: The Oprah Magazine, Details, The Village Voice, Poets & Writers, Tin House, Out, Michigan Quarterly Review, The Forward, and numerous other publications. In addition, he has also won fellowships from Yaddo, Djerassi, the Civitella Ranieri Foundation, and the Edward F. Albee Foundation as well as first prize in the Dornstein Contest for Young Jewish Writers. He has taught creative writing at Columbia University, the George Washington University, New York University, Brooklyn College, and the Stonecoast MFA Program. He currently resides in Washington, D.C.