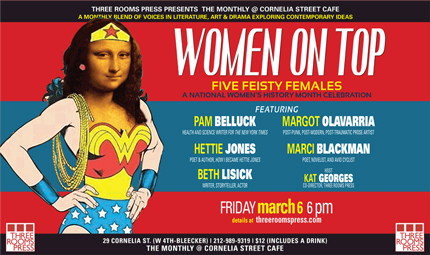 ABOUT THREE ROOMS PRESS
Three Rooms Press is a fierce, New York-based independent press inspired by dada, punk, and passion. Recent and forthcoming books include DARK CITY LIGHTS: NEW YORK STORIES (edited by Lawrence Block); LAST BOAT TO YOKOHAMA (a biography of Beate Sirota Gordon); Janet Hamill’s TALES FROM THE ETERNAL CAFE (with an introduction by Patti Smith); MIKE WATT: ON AND OFF BASS, a photo memoir by the great punk rock bass player; and MY WATERY SELF: MEMOIRS OF A MARINE SCIENTIST (by Stephen Spotte). The press also publishes MAINTENANT an annual journal of contemporary Dada writing and art, archived in museums worldwide, with contributions from top creators around the world. https://threeroomspress.com