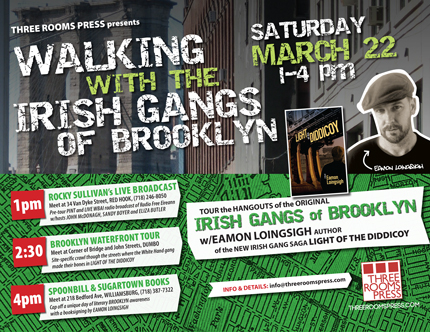 March 22: Explore the Irish Gangs of Brooklyn with Eamon Loingsigh

WALKING with the IRISH GANGS of BROOKLYN

Explore the hangouts of the original  IRISH GANGS of BROOKLYN with journalist Eamon Loingsigh, author of the new Irish Gang novel LIGHT OF THE DIDDICOY.  Take a unique tour of historical sites related to the early 20th century Irish gangs of Brooklyn, which are the focus of LIGHT OF THE DIDDICOY, the riveting and immersive saga of an Irish gang on the Brooklyn waterfront in the early part of the twentieth century, told through the eyes of young newcomer Liam Garrity.

Meet at Corner of Bridge and John Streets, DUMBO
Site-specific crawl though the streets where the White Hand gang made their bones in LIGHT OF THE DIDDICOY

Meet at 218 Bedford Ave, WILLIAMSBURG, (718) 387-7322
Cap off a unique day of literary BROOKLYN awareness with a booksigning by EAMON LOINGSIGH at this terrific INDIE bookstore
INFO & DETAILS: info@threeroomspress.com

PRAISE FOR LIGHT OF THE DIDDICOY:

“Novelist Eamon Loingsigh has so comprehensively inhabited the teeming New York City of his debut novel Light of the Diddicoy that he captivates the reader from the first page. . . It’s a brutal story of Irish America that the author, whose family roots in the city are as deep as his characters, was apparently born to write. Loingsigh’s prose has immense narrative force, and his characters are innocents or chancers on the make who know there’ll be no second chances. . . This is wonderful pulp fiction that knows that one man’s tale can in fact tell the entire city’s.” — Cahir O’Doherty, Irish Central

“The dark and compelling Irish American gang lifestyle of early 1900s Brooklyn pulses through this sharp, hardboiled drama…. Loingsigh’s book looks at a fascinating lifestyle drawn from his extensive research and his own family history…. The writing is sharp when gangsters are involved, yet it preserves a poetic Irish heart.” —ForeWord Reviews

“Loingsigh’s narrative owes much to historical accounts and family lore; he easily evokes the poverty, pain and hard labor that made up the working experience of the immigrant class in early 20th-century New York, giving the story a grimy verisimilitude…. The tale of William’s early days rings with passion and pain, ultimately making for an engrossing read.” —Kirkus Reviews

“LIGHT OF THE DIDDICOY is an amazing series of literary leaps from terra firma into the stratosphere above. The writing embraces you, and his description of the savagery visited on poor people is offset by the humor and love of the traditional Irish community. Don’t leave the store without this book.”
—MALACHY MCCOURT, author of Malachy McCourt’s History of Ireland