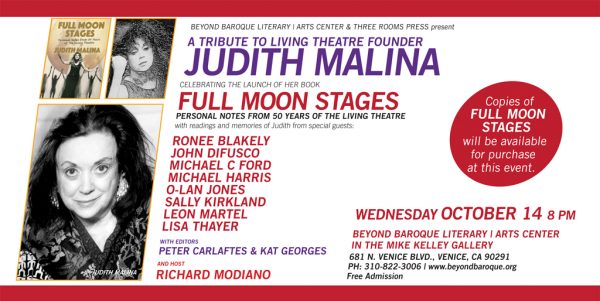 Beyond Baroque Literary | Arts Center and Three Rooms Press present A Tribute to Living Theatre founder Judith Malina, celebrating the release of her new book FULL MOON STAGES: Personal Notes from 50 Years of The Living Theatre on Wednesday, October 14, 2015 at 8 pm at Beyond Baroque.

As co-founder of the internationally known and highly controversial radical political troupe, The Living Theater, author JUDITH MALINA is one of the leading female countercultural figures of the 50s, 60s, 70s and beyond. In Full Moon Stages: Personal Notes from 50 Years of The Living Theatre, Malina creates an intimate memoir in a unique format with a collection of personal notes written on every full moon for fifty years from 1964 to 2014. With O-LAN JONES, MICHAEL HARRIS, LISA THAYER, RONEE BLAKLEY, LEON MARTEL, MICHAEL C FORD, JOHN DIFUSCO, and SALLY KIRKLAND, plus editors Peter Carlaftes & Kat Georges and host Richard Modiano.