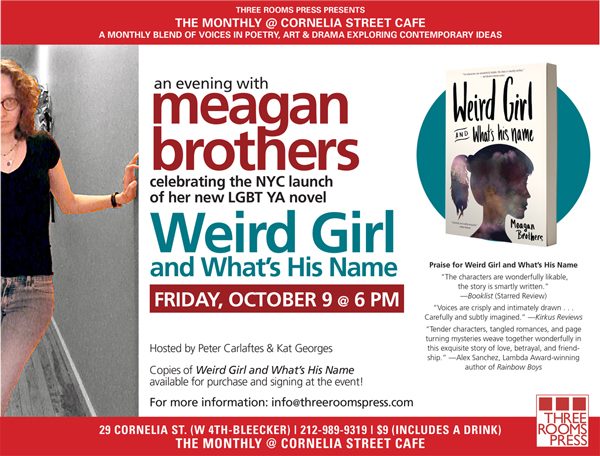 Award-winning LGBT YA author MEAGAN BROTHERS celebrates the release of her extraordinary new novel WEIRD GIRL AND WHAT’S HIS NAME with a reading at Cornelia Street Cafe on Friday, October 9 at 6 pm.

“An Evening with Meagan Brothers” will feature the author—whose previous books include Debbie Harry Sings in French and Supergirl Mixtapes—reading from her new book and sharing stories about what inspired it. A book signing follows the reading.

Copies of WEIRD GIRL AND WHAT’S HIS NAME will be available for purchase and signing at the event.

ABOUT MEAGAN BROTHERS
Meagan Brothers is the author of two previous novels for young adults, Debbie Harry Sings in French and Supergirl Mixtapes. She has also been, variously, a musician, a performing poet, a record store clerk, and an adjunct professor of creative writing at Manhattanville College in Purchase, NY. A native Carolinian, she currently lives and works in New York City.