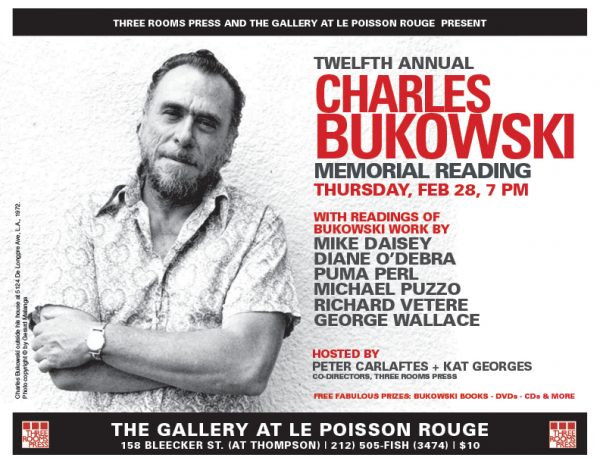 Doors open at 6:30pm. (for best seating please arrive early).All attendees have a chance to win Bukowski books, CDs, DVDs, and other prizes. And drinks. And drinks. A limited open mic will be available for audience members wanted to share their personal favorite Bukowski poem (under 2 minutes).

Diane O’Debra is a performance artist, comedian and actress known for her duo with her Irish twin sister, The O’Debra Twins, which won a Village Voice Best of New York Award and received ECNY Award Nomination for Best Duo.

Peter Carlaftes is a New York-based publisher, playwright, actor, poet, and editor. He is the author of 12 plays, including a noir treatment of Knut Hamsun’s Hunger, and the celebrity rehab center spoof, Spin-Dry. He has appeared in numerous Off-Broadway productions, including his comic solo performance piece, Lenny Bruce: Dead & Well, As an author, Carlaftes has penned five books including A Year on Facebook (humor), I Fold With The Hand I Was Dealt (poetry) and the play collections and Teatrophy (3 More Plays).
He is a co-director of Three Rooms Press.

Kat Georges is a New York-based poet, playwright, performer and designer. In New York since 2003, she has curated poetry readings, performed widely, and written and directed numerous Off-Broadway plays (including Jack Kerouac: Catholic by Larry Myers, and The Old In-and-Out, by Madeline Artenberg and Karen Hildebrand, and ANTI, by Peter Carlaftes). Books include Slow Dance at 120 Beats a Minute, Punk Rock Journal and Our Lady of the Hunger, as well as her upcoming collection of plays, Three Somebodies.
She is co-director of Three Rooms Press.