↓
Home→Books and Authors→SCAVENGER: A Novel by Christopher Chambers
Share This! 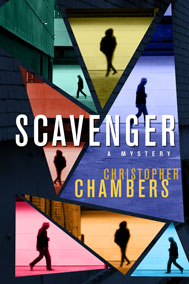 “Chambers comes out of the box swinging hard in this fast-moving, down-and-dirty crime novel that kicks up the tarp on the sleazy, duplicitous, double-dealing underbelly of our nation’s capital. . . . Two thumbs up for Chambers!” —Tracy Clark, author of Borrowed Time, winner of the G.P. Putnam’s Sons Sue Grafton Memorial Award

Dickie Cornish, a street-wise neophyte Black sleuth, must learn to navigate a high stakes game of greed, deceit, and murder in a perilous Washington, D.C. world of unscrupulous politicians and desperate street hustlers where everything is on the line.

In SCAVENGER, the forthcoming novel from Christopher Chambers (A Prayer for Deliverance and Sympathy for the Devil) street-wise survivor Dickie Cornish lives in a homeless camp near the Smithsonian’s Museum of National History. Addled by the K2 and liquor he prays will blunt the pain of a harsh winter, he endures the cruelty of Donald Trump’s capital and ongoing nightmares from his youth. He makes a few dollars a day turning the possessions of evicted tenants into curb flotsam, scavenging what he can from the wreckage of other lives to save his.

On one expedition Dickie gets lucky as he uncovers a treasure in the trash of a wealthy ex-Homeland Security Secretary, Jamie Bracht. But his joy is short-lived, when he simultaneously finds out that two of his friends who escaped the shelters for a decent life have been murdered. In fury, he attacks the local cops, lands in jail, then is plucked out by Bracht, who has a job for him: find a woman using the sub-level network of the streets and the underground world of undocumented immigrants. In return, Bracht promises Dickie a fresh, clean start at a new life.

Before long, Dickie discovers that the woman he is supposed to locate guards another treasure that Bracht will stop at nothing—even murder—to retrieve. In his achingly amateur role as sleuth and guardian, Dickie must quell his demons and use his scavenger skills and street smarts to deny Bracht his prize…and save himself from the big frame-up.

SCAVENGER is a 21st century take on the noir, hardboiled tales of the 20th, with both bleak and colorful backdrops in the nation’s capital of today. It is layered with characters whose damage outlines why they love, lose, double-cross, and even kill. Dickie Cornish is a new kind of detective: one who is a street-wise local and a neophyte detective, learning to play a new game as it unfolds.

“In SCAVENGER, Christopher Chambers shows us a Washington D.C. we’ve never seen through the eyes of a sleuth unlike any we’ve ever met. A harrowing noir odyssey through contemporary America.” —Vince Keenan, Noir City magazine

“Chris Chambers’s Scavenger is a clever mystery told with wry wit and a vivid second-person style that straps you in for its roller coaster ride. You open this book and that voice starts speaking to you and you want to hear what it has to say. Simply put: this is a damn a good read.” —Mat Johnson, author of Incognegro, Pym and Loving Day

“Scavenger is as hard and unflinching as noir gets—an immersive portrait of life on the streets in Trump’s America. Yet, in the person of Dickie Cornish, Chambers has delivered a voice of idiomatic, hard-won radiance—and a truth-seeker equal to all the lies and all that lies ahead.” —Louis Bayard, author, Roosevelt’s Beast and Mr. Timothy

“Chambers comes out of the box swinging hard in this fast-moving, down-and-dirty crime novel that kicks up the tarp on the sleazy, duplicitous, double-dealing underbelly of our nation’s capital. Into this shadowy knot of deceit walks unconventional detective, Dickie Cornish, a homeless, down on his luck survivor for whom the stakes couldn’t be higher, or the risks greater. Two thumbs up for Chambers!” —Tracy Clark, author of Borrowed Time, winner of the G.P. Putnam’s Sons Sue Grafton Memorial Award

“Novels written from the perspective of homeless substance users don’t come along every day. When they do, it’s a good idea to pay attention, since they offer a window into the casual cruelty of our social economy, which much fiction eschews. Christopher Chambers’ new mysteryScavenger offers just such a window. It features homeless survivor-turned-sleuth Dickie Cornish in rapidly gentrifying Washington, D.C. Dickie was originally middle-class, but he’s trapped in a death spiral of downward mobility … The novel is focused front and center on the real estate war against the city’s mostly Black and Latinx poor—a war to clear out this population and pave the way for luxury domiciles, it says.Scavenger delineates its more recent carnage in the nation’s capital.” —Washington City Paper

Christopher Chambers is a professor of media studies  and novelist. His previous works include the novels (both Random House) A Prayer for Deliverance and Sympathy for the Devil (NAACP Image Award nominee); the graphic anthology (with Gary Phillips) The Darker Mask (Tor Books); and the PEN/Malamud honorable mention story “Leviathan” in the Voices from the Other Side anthology (Kensington Books). Professor Chambers contributed a short stories to the Anthony award-winning anthology The Obama Inheritance and Black Pulp 2 as well as The Faking of the President.He is a regular commentator/contributor on media and culture issues on SiriusXM Radio, ABC News, HuffPost. He resides in his hometown of Washington, D.C. with his family and German Shepherd, Max.