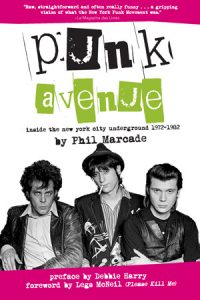 “A fast, fun read that fills in historical gaps and establishes Phil Marcade as more than a character lurking in the shadows.” — Razorcake

“Unstoppable tales from the inside of the inside — of his pals Johnny Thunders, Joe Strummer, Debbie Harry, Dee Dee Ramone, of Max’s, CBs and the long-ago Lower East Side, all told in a matter-of-fact style that only makes them more incredible. A definitive dispatch from the trenches (and gutters) of New York punk.” — Robert Duncan, Managing Editor, Creem.

PUNK AVENUE: Inside the New York City Underground 1972-1982 is an intimate account of Paris-born author Phil Marcade’s first ten years in the United States, where—after drifting from Boston to the West Coast and back—he wound up in New York City and became deeply immersed in the start of the punk rock scene. With brilliant, often hilarious prose, Marcade relays first-hand tales of his experiences, such as having the Ramones play their very first gig at his party, working with Blondie’s Debbie Harry on French lyrics for her songs, enjoying Thanksgiving with Johnny Thunders’ mother, and starting the beloved NYC punk-blues band The Senders.

PUNK AVENUE includes a preface by Debbie Harry of Blondie fame, and a foreword by Legs McNeil, co-editor of the renowned punk rock oral history, Please Kill Me. Inrockuptibles Magazine who calls it “Hilarious and deeply touching . . . a one of a kind odyssey.” And Rock & Folk Magazine hails it as “The best book about the New York Punk Scene.”

“A musician’s memoir of punk rock in its New York City heyday shows how much fun it was while it lasted, before AIDS and heroin had the last laugh. . . . Must-read for those who love that era and want a fresh perspective on it.” ―Kirkus Reviews

“It was hard to put this book down. It’s a fun and dishy read!… Gives us the real 411 about both CBGB’s and Max’s Kansas City and the drug scene that was happening.” ―Ginger Coyote, Punk Globe Magazine

“Phil Marcade’s Punk Avenue is a compelling account of life as an artistic Parisian in Downtown New York, back in the good/bad ol’ days of sex and drugs and rock n roll. In a subculture of anti-fashion and nihilism, Marcade stood out with an urbane, sophisticated sound and style deeply rooted in R&B musicology — that makes sense now more than ever. Vive La Revolution!”  — Steven Blush, author/filmmaker, New York Rock, American Hardcore, Lost Rockers

“Punk Avenue is an incredible insider’s journey through New York’s 1970’s underground music scene. A natural storyteller and NYC legend in his own right, Phil Marcade recounts incredible adventures, mostly shared with friends destined to become the rock ‘n’ roll superstars of the era. From the hallways of the Chelsea Hotel to psychedelic barges on the canals of Amsterdam, from wild cross-country tours with his band The Senders to backstage antics at CBGB and Max’s Kansas City, to the notoriously deadly dope houses of the Lower East Side, he experienced it all . . . and lived to tell. His memory for detail, rollicking descriptions and (usually) hilarious punch lines are riveting. I literally could not put this book down! A must-read for anyone interested in a behind-the-scenes glimpse into the nascent Manhattan punk scene . . . or American rock ‘n’ roll history.” —Pleasant Gehman, author, Showgirl Confidential

“Just when you think you led a fascinating, fun, wild, scary life, along comes this maniac. I’m amazed Phil’s still here. But thankful he managed to make it back with these untoppable tales from the inside of the inside — of his pals Johnny Thunders, Joe Strummer, Debbie Harry, Dee Dee Ramone, of Max’s, CBs and the long-ago Lower East Side, all told in a matter-of-fact style that only makes them more incredible. A definitive dispatch from the trenches (and gutters) of New York punk.” — Robert Duncan, Managing Editor, Creem; author, The Noise

“A riveting account of desperate days and high-octane nights that vividly recall the gritty glamour of New York in the 1980s, that penniless yet golden age of sex not sexting, drugs not hugs, and pure, unadulterated rock and roll. Written in blood by somebody who was there, in the combat zone, loving every manic minute.” —Max Blagg, poet

“Marcade’s book is  historically important, invaluable in fact, but it’s also a fun, fast, nasty read. I couldn’t think of a better introduction to NYC in the days when the streets were dangerous, the rents were cheap, and the fun never ended.” —James “The Hound” Marshall, Bar owner, radio personality, collector, historian, new yorker…..

“Phil’s memoir of NYC in the 70s is almost as much fun as being there.” – Peter Crowley, Max’s Kansas City’s manager and booking agent 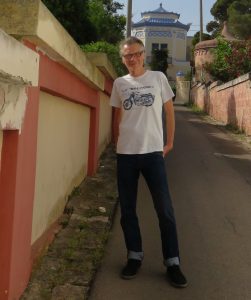 Phil Marcade was born and raised in Paris. At age 16, he got accepted in the most notorious art school in France, the Academie Nationale des Beaux Arts, but quickly dropped out and drifted towards Amsterdam. There he met Bruce, a kid from Boston, who invited him to come to the States for a couple of months. Marcade ended up staying there for 40 years.

After a few crazy months traveling up and down Route 66 in a cloud of marijuana smoke, which earned him a short stay in a Federal Penitentiary, he spent some time in Boston where he became good friends with Nan Goldin, David Armstrong, and Cookie Mueller before moving to New York in 1975. There, he became the lead singer of The Senders, a Punk Blues Retro-R&B band he started in 1976 continued to play until 2001.

Marcade was an active member of the Max’s Kansas City and CBGB’s New York Punk Scene since its beginning and befriended a lot of its notorious characters and musicians, like Willy DeVille (Mink DeVille), Debbie Harry(Blondie), Nancy Spungen and Sid Vicious, Johnny Thunders (New York Dolls) and Wayne Kramer(MC5). The Senders shared stages with such bands as The Heartbreakers, The Cramps, Suicide, The Ramones, The Clash and many others. The Senders released six albums and they were hailed as “Best Bar Band in New York” in the “Best of NYC” issue of New York Press.

Marcade’s first book, Au-delà de l’Avenue D, was published in France in 2007, then in Italy in 2011. He now works as a painter and graphic artist.