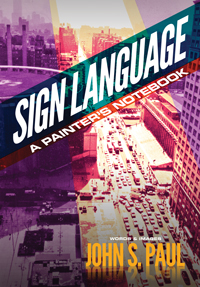 “John Paul is primarily a painter. A painter of lush narrative canvases, portrait sketches, and genre scenes, as well as a painter of billboards and movie scenery, and with language, he is a limner of a life lived in New York City. Few painters have the range that Paul has, and fewer still possess the economy of language combined with the rich visual textures that give his poetry the feel of a documentary. One is tempted to compare his work to Dos Passos, or maybe Ferlinghetti.”
–Bradley Rubenstein, fine artist

SIGN LANGUAGE: A PAINTER’S NOTEBOOK pays homage to the lost art of urban outdoor sign painting, in photos, drawings and words. In a working environment both novel and ambitious, Paul found success, noting “No other job gave me such a direct impact on the urban landscape, or such physical engagement. Painting signs over Broadway in 1984 was a rare look down from the elevated height of a heroic messenger.” Poetry and the lost art of sign painting collide in this debut book by New York painter/poet (and part-time street artist) John S. Paul. A mashup of angular skylines, unusual people and unique pockets of the world’s greatest city, woven with poems detailing the danger, fear, and freedom in soaring heights. Few books have ever provided such an insider perspective into this lost art. In 40 photos and 30 poems and stories, the author creates an immersion into a rarified world of danger and beauty, that raises the sense of the importance of moments, and blurs the boundary between public and private space. Enthralling and thoroughly engrossing, SIGN LANGUAGE is also a memoir of the desperate measures one artist took to remain committed to his creative side and still provide for his family, despite the perils of the profession. Beautifully conceived and designed, it is of interest to both admirers of photography and poetry, as well as fans of the cityscape. A “High Line Park” in print.

“An exploration of city life—loud and raucous words, images, movement . . . best seen and experienced from above. Often there was a feeling of longing for the simpler, slower mid-west life left behind . . . The assortment of photos and drawings illuminated the text and gave deeper meaning. Rarely have I seen a collection of poetry that created such a cohesive end product.” —Randy-Lynne Wach, San Francisco Book Review

“SIGN LANGUAGE: A PAINTER’S NOTEBOOK (Three Rooms Press, 2014) pays homage to the lost art of urban outdoor sign painting, in photos, drawings and words. A mashup of angular skylines, unusual people and unique pockets of the world’s greatest city, woven with poems detailing the danger, fear, and freedom in soaring heights. The author/photographer creates an immersion into a rarified world of danger and beauty, that raises the sense of the importance of moments, and blurs the boundary between public and private space . . . Socrates said, ‘The unexamined life is not worth living,’ but an unlived life is not worth examining. Paul has managed a high wire act, both exploring and documenting his existence with grace and poetry, and, like a good tightrope walker, has done it without a net.” —Bradley Rubenstein, Culture Catch

“Sign Language is the work of a singularly interesting and engaged mind: No one sees the world as John S. Paul sees it. The distinctiveness of his vision is viscerally evident in his words and his images, where beauty and grittiness, anxiety and repose, all mix and merge to create something altogether new. This honest, stunning book will make you see the world differently, too.” —Rosie Schaap, author of Drinking With Men

“John Paul answers the question Is there life on Mars? by serving us Breakfast on Mars, only Mars turns out to be someplace very down-to-earth. Thankfully we are invited to share his perceptions: “we spy the weather / with foxy eyes”. We are whoever he is, high above the storied metropolis, which he sees as painter, photographer, and poet. Its denizens may thrill, but theirs are not the only stories to be told. Too, there is the story of each one, and it comes up roses in this painter’s avid first collection.” — Vincent Katz, author of The Complete Elegies Of Sextus Propertius; editor of VANITAS

“A vivid portrayal of a trade and city, of the distance between working and careering, and the eternal desire to finish painting before sunset.” —Steve Powers, artist

“The mark of creation is its flow. I see in the work of John Paul the perception that is this flow – – – flying over trochee – all elements from painting, prose, poetry that makes life, creates the interchange of all life from flying over scaffolding hundreds of feet above ground – – –(my hero)!!! To flying over the work with the aplomb of such perception – which is what creation is all about!” —Knox Martin, artist

John S. Paul came to New York City in 1972 from Chicago, and is still Midwestern at heart. He studied at Washington University, St. Louis, where emphasis was placed on craft, grounded in the canons of German expressionism and the Bauhaus. He went on to Yale for an MFA, where modernism was key. Later, in San Francisco, he attached himself to a drawing group with Elmer Bischoff, Joan Brown, and George Lloyd, where he focused on mural sized landscapes of California scenery. Relocating to New York, he turned to portrait and simple genre painting: still life, interior, bathed in the beautiful New York light that Matisse spoke about. He associated with fellow downtown artists Fairfield Porter, Alex Katz, and Larry Rivers, and shared a loft with Ilya Bolotowsky. In the eighties John Paul worked in the novelty world of outdoor advertising, billboards and wall signs. This job exposed him to a different, sharper and more practical kind of talent and craft and took his eye to crazy heights, gothic viewpoints of skewed angles and verticality. And danger. These “danger” moments sharpened his eye as the observer, and trained him to be on the lookout for beauty. Today, he devotes himself full time to art and writing. He lives in Brooklyn, NY.