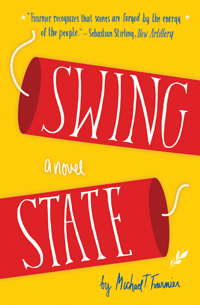 “Fournier conjures three vivid voices for this bleak tale in which things go from bad to worse. His excellent writing should appeal to readers of contemporary fiction who like the view to be unflinching.”
–Library Journal

“Fournier is one of our best writers and Swing State is his finest book yet.”
–Mike Faloon, The Hanging Gardens of Split Rock

Michael Fournier’s first novel, HIDDEN WHEEL–a philosophical literary work about artistic self-promotion and the corporate infiltration of hipsterdom–earned him comparisons to such literary luminaries as Richard Russo, Jennifer Egan, André Dubus III, and Michael Chabon. Now, in SWING STATE, Fournier unveils the generally overlooked decades-long economic downturn in the rural Northeast. With an unflinching eye, Fournier lays bare the dim dreams and raw existence of the lives of three seemingly disparate residents of a small town in New Hampshire, who share the same goal: get out. Roy Eggleton, an Afghanistan vet, deals with emotional issues that hamper his ability to find work. Zachariah Tietz, an overweight friendless teenager, develops a reality game show he deludes himself into believing will be his ticket out. Fireworks freak, bully, and petty thief Dixon Dove works at a fast food restaurant managed by a known pervert to save enough extra money to leave. As the story unfolds, the paths of all three characters begin to intertwine. Tension and conflict build as the convergence of bullying and terrorism blurs until the consequences are fatal.

“Through each of his characters, the author addresses issues that surface in poor, rural communities, treating these sensitive topics with compassion. With his masterful development of characters and themes, and an uncanny ability to weave these stories
together seamlessly, Fournier creates a compelling portrait of life in the American underclass.” —Rain Taxi

“The unique writing style and sympathetic characters found in Swing State create an intriguing read. Fournier draws potent scenes depicting their struggles – returning from war, finding acceptance and approval, and asserting their own independence. Although each character has a unique story to tell, Fournier deftly interweaves and connects their lives until they come together in the explosive conclusion.” —The Compulsive Reader

“Fournier pulls no punches with Swing State—it’s a world where every step forward means two steps back. Few readers will expect a happy ending, though many may be surprised by the way the three stories ultimately merge. By making his characters simultaneously distinctive and authentic, Fournier ensures that readers carry on until the end and that they walk a mile in someone else’s shoes to get there.” —Sheila M. Trask, Foreword Reviews

“Fournier conjures three vivid voices for this bleak tale in which things go from bad to worse. His excellent writing should appeal to readers of contemporary fiction who like the view to be unflinching.” —Library Journal

“With SWING STATE, Michael Fournier has delivered a riveting, compassionate story of life in the American underclass. These are voices seldom heard trying to rise above in a community left to crumble. The narrative gains momentum as the characters struggle to overcome the inertia of smalltown New Hampshire. Fournier is one of our best writers and Swing State is his finest book yet.” —Mike Faloon, The Hanging Gardens of Split Rock and Fan Interference

“Fournier recognizes that scenes are forged by the energy of the people involved and remembered by the artistic tomes they leave behind, and nails both perspectives. It’s managed to make me excited . . .” —NewArtillery.com

“With the DIY ethos of a zinester and the backing of a small press, Fournier takes his inspirations from musicians and writers on the fringe of society. A fellow rebel!” —Blackheart Magazine

“This is a philosophic novel which gives the reader insights into the nature of the creative impulse; as such, it ought to be required reading for that class of artisans who also consider themselves cognoscenti, members of a select tribe known to marketers as ‘influentials.’”
—TheNoise.com

“Don’t be surprised if, upon finishing this book,
you long for an art form you’ve never encountered.” — Selah Saterstrom; author of The Pink Institution

A trust fund kid, posing as a drug dealer to maintain street cred, opens an art gallery designed to fail. A self-employed drummer sells sperm to raise funds for a new kit before his band embarks on their first-ever tour. A former chess prodigy-turned-dominatrix paints sixty words a day on a giant canvas to stave off the coming Singularity. A hipster blogs about his fictional tagger alter ego and bumbles into quick fame with a series of paintings on CD covers. Hidden Wheel, Michael T. Fournier’s debut novel, is an unflinching reflection of the growing complexities of navigating art, commerce, and the internet. Its use of intersecting plotlines illustrates the confusion and potential of the early 21st century and the evolving ways in which its inhabitants try to make a mark in the specter of financial upheaval and shifting technologies.

Michael T. Fournier is a writer/critic/musician, and the author of two novels: HIDDEN WHEEL and SWING STATE (both Three Rooms Press), as well as DOUBLE NICKELS ON THE DIME (33 1/3/Continuum), a book-length discussion of the 1984 Minutemen album of the same name. He is founder and co-editor of Calbido Quarterly, a broadsheet literary journal. His writing has appeared in the the Oxford American, Vice, Pitchfork, and the Boston Globe. He has taught literature and punk rock history at Emerson College, Tufts University, University of Maine, and beyond. He lives in Western Massachusetts with his wife Rebecca and their cat.