Weird Girl and What’s His Name
by Meagan Brothers 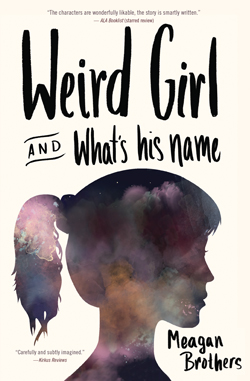 Weird Girl and
What’s His Name

“The characters are wonderfully likable, the story is smartly written.” —Booklist, (Starred review)
“Crisply and intimately drawn. . . Carefully and subtly imagined.” —Kirkus Reviews (Starred Review; "Best Teen Books of 2015" & "Best Teen Romance Novels of 2015")
"Say hello to one of my new benchmarks for great YA fiction. Weird Girl and What’s His Name is absolutely wonderful, heartbreaking, and utterly engaging stuff." —Manhattan Book Review
“As someone who’s been both a weird girl and a what’s her name, I heartily endorse this book.” — Janice Erlbaum, author, I, Liar and Girlbomb
In the tiny podunk town of Hawthorne, North Carolina, seventeen-year-old geeks Lula and Rory share everything—sci-fi and fantasy fandom, Friday night binge-watching of old X-Files episodes, and that feeling that they don’t quite fit in. Lula knows she and Rory have no secrets from each other; after all, he came out to her years ago, and she’s shared with him her “sacred texts”—the acting books her mother left behind after she walked out of Lula’s life. But then Lula discovers that Rory—her Rory, who maybe she’s secretly had feelings for—has not only tried out for the Hawthorne football team without telling her, but has also been having an affair with his middle-aged divorcee boss. With their friendship disrupted, Lula begins to question her identity and her own sexual orientation, and she runs away in the middle of the night on a journey to find her mother, who she hopes will have all the answers. Award-winning author Meagan Brothers (Debbie Harry Sings in French and Supergirl Mixtapes) offers piercing prose in her latest fresh LGBT YA novel WEIRD GIRL AND WHAT’S HIS NAME (ISBN 978-1-941110-27-0, Three Rooms Press, October 13, 2015), which speaks to anyone who has ever felt unwanted and alone, and who struggles to find their place in an isolating world.

High Praise for WEIRD GIRL AND WHAT’S HIS NAME

“Aside from being extremely well-written, it was very real. The characters felt like genuine seventeen-year-olds with interesting, but relatable, problems. They are the kind of characters that stay with you and become part of your literary family . . . This is a novel that transcends the LGBTQ genre, and it holds universal lessons for all. It is reminiscent of Judy Bloom’s Are You There God, It’s Me, Margaret and Tiger Eyes in the way it tackles somewhat taboo subjects within a smoothly written narrative. It has all the makings to become a classic of this generation.” –Foreword Reviews (5-Star Review; Reviewers' Choice 2015)
"Weird Girl and What's His Name" will prove to be an enduringly popular addition to school and community library collections." —Midwest Book Review
“Voices are crisply and intimately drawn. Minor characters are equally vibrant . . . Carefully and subtly imagined.” —Kirkus Reviews (Starred Review; "Best Teen Books of 2015" & "Best Teen Romance Novels of 2015")
“Rory and Lula are charming characters who talk to the reader as though they are talking to a good friend. . . . Teens will find a lot of appeal here” —Someday My Printz Will Come/School Library Journal
"What could have been a niche novel only for X-Philes is a quirky, thoughtful illumination of identity formation and the difficulty of assigning labels to love." —The Globe and Mail
“The characters are wonderfully likable, the story is smartly written, and—what’s this?—there’s a possibility for a happy ending? Read and find out.” —Booklist (Starred Review)
“Effectively mixes past and present . . . real, evolving . . .” —Publishers Weekly “Brothers’s pitch-perfect dialogue and well-polished prose make her an author to watch.” —School Library Journal
"Say hello to one of my new benchmarks for great YA fiction. Weird Girl and What’s His Name is absolutely wonderful, heartbreaking, and utterly engaging stuff." —Manhattan Book Review
“Recommended for huge fans of “The X-Files” or anyone who has struggled to figure out their own identity or sexuality” —TeenReads "Readers who enjoy coming-of-age stories will enjoy this powerful novel.” (Top 18 New YA Books of Fall 2015) —BuzzFeed
"What really shines in Meagan Brothers' novel is the voices and the characters; they feel authentically human and vibrant and you'll be glad to spend 300-odd pages with the both of them.” (Top 17 New YA Books of October 2015) —Bustle
“This new LGBT YA novel is as gripping as it is heartfelt.” (Best 12 Books of October 2015) —Brit+Co
“There have been a lot of noteworthy LGBT YA novels hitting the market lately, but Weird Girl and What's His Name is one of the most complex and touching.” (10 New YA Books Every Twentysomething Should Read) —Style caster
“Brothers burrows deep into her characters' hearts and minds as they struggle with unruly sexual urges, family issues, and their own ruptured friendship. A welcome addition to the growing canon of LGBTQ-themed teen literature.” —Chronogram
"Meagan Brothers is a force to be reckoned with . . . she reminds us of the exquisite pain of unrequited love and of the absurd loyalty and drama we're all capable of." —Book Jawn "A great story about how gender roles are not always clear cut, and how self-expression is all about letting go of your fears and doubts." —YA, Why Not?
“Truly a fantastic read. . . Definitely recommend this book to anyone looking for a good plot line, or simply a wonderful book to read.” —League of Advanced Readers "A satisfying breath of fresh air." —Lambda Literary
“Rory is another great LGBTQ teen, whose gayness does not define him as a person." (Top 30 YA books of 2015) –Forever Young Adult
"A wonderful story about family, love, and fan fiction. Brothers does an excellent job of showing that true friendship can survive anything, including football, sexuality, and government coverups." —Brian Katcher, author, Almost Perfect
"Rory and Lula might bond over out-there sci-fi, but their relationship is as real as it gets. To paraphrase their favorite show: The truth is in here." —D.C. Pierson, comedian and author, The Boy Who Couldn’t Sleep and Never Had To
"Gorgeous writing, real characters I could give my heart to, and a huge-hearted exploration of being a fan of something specific (music! X-Files! football!). . . I'm certainly now a huge fangirl of Meagan Brothers! — Kim Culbertson, Northern California Book Award Winner of Instructions for a Broken Heart and Catch a Falling Star
"I fell in love with both narrators of WEIRD GIRL AND WHAT'S HIS NAME, and found their story meaningful, original, and truthful. As someone who's been both a weird girl and a what's her name, I heartily endorse this book." —Janice Earlbaum, author, I. Liar and Girlbomb
"I wish I could go back in time, when I was Lula and Rory's age, so I could feel like I finally had someone who spoke my language. . . This is a book for anyone that has ever binge watched on a TV show or fallen in love with their best friend or searched for a way out of redundancy or dreamed of an adventure.” —Aimee Herman, author, To Go Without Blinking
"As an avid reader and writer, there is rarely a novel that makes me think 'I have never read a book like this before.' WEIRD GIRL AND WHAT'S HIS NAME is one of the occasional exceptions . . . An innovative piece of young adult fiction, and I definitely would recommend to both young adult and adult fiction readers.” —Annabelle Jay, author, Caron High News
"Fanboys and fangirls, rejoice! This wise and witty book is pure teen-geek heaven. With laugh-out-loud moments, smartly drawn characters, and a platonic love story that rivals Scully and Mulder's, this book perfectly captures the joys and heartaches of all-consuming fandoms and 'it's-complicated' friendships. I loved it."–J.C. Lillis, author, How to Repair a Mechanical Heart and We Won't Feel a Thing
"A bold, funny and touching story for anyone who has experienced the heartache of an unrequited crush, whose sexual identity is a work-in-progress, and whose journey to self-discovery represents not so much a straight line as a meandering path. —Melissa Keil, author, Life in Outer Space 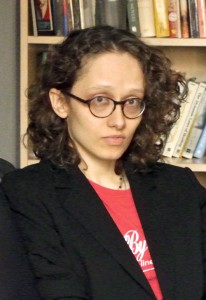 Meagan Brothers is a writer, poet and musician best known for her young adult novels Weird Girl and What’s His Name, Supergirl Mixtapes, a 2012 YALSA Best Fiction for Young Adults nomination, and Debbie Harry Sings in French, an ALA Best Book for Young Adults, which won a GLBT Round Table ALA Award, and was named a New York Public Library Book for the Teen Age. She was founder and lead guitarist for the punk rock band Steel Pier Sinners. Originally from Spartanburg, North Carolina, she currently lives in New York City.

For a complete press kit, or to interview Meagan Brothers, or to book Meagan Brothers for an event or reading, please contact Three Rooms Press at info@threeroomspress.com or call 212-731-0574.