with an introduction by John Scalzi 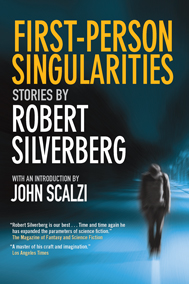 “Time and again, Silverberg sets the bar high for himself and then clears it. … This fine retrospective collection is worth any SF reader’s time.” —Publishers Weekly (starred review)

“One of the finest writers science fiction has ever produced, Robert Silverberg’s boundless imagination is on exquisite display in this career-spanning collection. I can say without hyperbole that this book contains some of the best works I have ever read.” —John Joseph Adams, series editor, Best American Science Fiction and Fantasy

FIRST-PERSON SINGULARITIES (978-1-941110-63-8; Trade Paper, 418 Pages, October 31, 2017; $19.95) by science fiction Grand Master ROBERT SILVERBERG features eighteen tales written over the course of his long career, all told in the first-person singular. Inspired by W. Somerset Maugham’s Six Stories Written in the First Person Singular, Silverberg takes on the challenge, offering up his own unique sci-fi twists and “running the gambit of singularity.”

Each story in FIRST-PERSON SINGULARITIES offers a one-of-a-kind narrator: a dolphin feeling the pangs of love for a human being; a computer eager to convince us of its sanity; a Greek good who has surreptitiously survived into modern times; an alien visitor living in disguise in a New York City hotel. Even a pudgy, timid Henry James gets the Silverberg treatment as the witness/narrator of H.G. Wells’s The War of the Worlds. Each story features a special introduction by Silverberg, providing the inside scoop on his experience writing for, and publishing with, the greatest science fiction magazines of the past and present.

BUY NOW from your FAVORITE BOOKSELLER (click on button below)

FIRST-PERSON SINGULARITIES includes an introduction by Hugo-award winning sci-fi author John Scalzi (Old Man’s War series), who notes that the full range of Silverberg’s mastery is in evidence here. “Scrapper, artist, titan, icon: All of these Robert Silverbergs existed. How can I, or any reader who was not themselves a contemporary of Bob, experience each of these Silverbergs? One way, I would argue, is in the book you hold in your hands right now.”

DISTRIBUTED IN THE U.S. AND INTERNATIONALLY BY: PGW/Ingram Content Group.

“Highly recommended both for Silverberg fans and readers looking to encounter his work for the first time.” —Booklist

“The sheer diversity of storylines is nothing short of extraordinary. … A singularly unique collection.” —Kirkus Reviews

“An intimate collection not only because first-person centers the reader in a character’s head but because we see growth and mastery, pulp and art, enthusiasm and cynicism, all in their time, all showing us Robert Silverberg in his time. … It’s still Robert Silverberg’s time.” —from the Introduction by John Scalzi, author, Old Man’s War

“Robert Silverberg is our best . . . Time and time again he has expanded the parameters of science fiction.” —The Magazine of Fantasy and Science Fiction

“A fascinating book. . . I strongly recommend this book to anyone who is a fan of Robert Silverberg, fantasy or science fiction. You will not be disappointed.” —Casey’s Book Reviews

“Genre legend Silverberg’s ambition, imagination, versatility, and skill are all in evidence in this superior collection of 18 thought-provoking first-person short stories, which were written over five decades. Time and again, Silverberg sets the bar high for himself and then clears it, as in a tale told from the perspective of an English-speaking dolphin who has developed feelings for a human woman (“Ishmael in Love”) and another in which an alien crablike creature, disguised as a human, is dismayed to find that he’s an object of attraction for a persistent neighbor (“The Reality Trip”). He riffs on Joseph Conrad in “The Secret Sharer,” which features a very different kind of stowaway. He also cleverly anticipated Jurassic Park in “Our Lady of the Sauropods,” an 1980 story in which DNA has been used to bring dinosaurs back to life, with very different consequences from those that Michael Crichton imagined. Silverberg’s creative story premises are matched by a remarkable ability to make his characters sympathetic, whether human or not. This fine retrospective collection is worth any SF reader’s time. (Nov.)” —Publishers Weekly (starred review)

The “I”S of Robert Silverberg: An Introduction by John Scalzi
Foreword by Robert Silverberg
Ishmael in Love
Going Down Smooth
The Reality Trip
The Songs of Summer
The Martian Invasion Journals of Henry James
Push No More
House of Bones
Call Me Titan
Our Lady Of The Sauropods
There Was an Old Woman
The Dybbuk of Mazel Tov Iv
Caliban
Passengers
Now Plus N, Now Minus N
The Iron Star
The Science Fiction Hall of Fame
To See The Invisible Man
The Secret Sharer

ROBERT SILVERBERG is one of the giants of the sci-fi genre, with four Hugo Awards and six Nebula Awards to his name. He was inducted into the Science Fiction and Fantasy Hall of Fame in 1999 and named a Grand Master by the Science Fiction and Fantasty Writers of America Guild in 2005. He is best known for his Majipoor series of novels and stories, as well as the Nebula-winning A Time of Changes, Nightwings, Across a Billion Years, The World Inside, Dying Inside, and many others.

Lately, Silverberg has been experiencing renewed interest in his work. His short story “Needle in a Timestack” is slated to be adapted for an upcoming film by Oscar-winning 12 Years a Slave director John Ridley. In addition, his story “How It Was When the Past Went Away” has been optioned for film by Temple Hill Entertainment, which also produced Twilight.