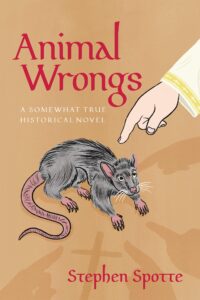 “Threaded with unique and sardonic humor, full and powerful, ANIMAL WRONGS is an off-beat exploration of human nature.” ―Ed Ricciuti, author, Bears in the Backyard

Historical fiction and preposterous legal arguments intertwine in Stephen Spotte’s electric new novel Animal Wrongs, set in a medieval French courtroom where animals are put on trial for “crimes” against mankind. Sixteenth-century lawyers fill the air with bluster, heckled and cheered by spectators as they defend or prosecute accused animals facing penalties of being hanged or burned alive at the stake. Spotte deftly unveils a story of opposing attorneys facing off against each other in ever-more opaque, convoluted, and dilatory trials. By the end of this novel, Spotte uses his considerable, critically-acclaimed storytelling skills to explore still-relevent theories on legal precedent, the church vs. the state, mankind’s place in nature, and animal rights.
ANIMAL WRONGS by Stephen Spotte
ISBN: 978-1953103093; Trade Paper Original; 386 pages; $16; October 19, 2021

“Threaded with unique and sardonic humor, full and powerful, ANIMAL WRONGS is an off-beat exploration of human nature.” —Ed Ricciuti, author, Bears in the Backyard

“A particularly inviting read that stands out from the crowd.” ―Midwest Book Review

“Even somebody who doesn’t love historical fiction as much as I do could get on with it. .. Funny and approachable to read.” ―Reviews Feed 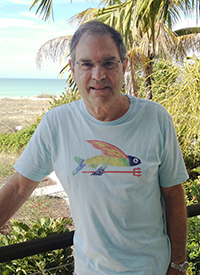 Dr. Stephen Spotte was raised in West Virginia, and after traveling the world’s high seas, he now makes his home in Longboat Key, FL. He is the author or coauthor of more than 80 scientific papers on marine biology, ocean chemistry and engineering, and aquaculture, which became the cornerstone of modern aquarium keeping. His popular articles about the sea have appeared in National Wildlife, On the Sound, Animal Kingdom, and Science Digest.

Dr. Spotte has published eighteen books, including three volumes of fiction, a memoir, and a work of cultural theory. He is a Certified Wildlife Biologist of The Wildlife Society and also holds a U.S. Merchant Marine officer’s license.