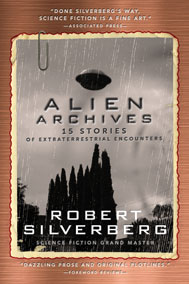 “Reaching back to the beginning of his career, SFWA Grand Master Silverberg collects 18 stories featuring alien encounters, some fond and some fearful. . . Silverberg fans and readers interested in the history of SF will find this worthwhile.”
–Publishers Weekly

“The latest in a series of Silverberg’s collections from Three Rooms Press focuses on stories about alien–human encounters, ranging from the deadly to the benign … Alien Archives still shows that Silverberg’s reputation as a skilled storyteller is well-deserved; it is still worth a look for those interested in a sampling of the SF Grandmaster’s prolific short story work.”
–Booklist

“Proving that human beings are sometimes the most alien creatures of all, Alien Archives is a delight for anyone who still wants to believe.” —Foreword Reviews

Aliens in all shapes and sizes—some fearsome, some outlandish, and some just plain fun—fill the pages of these hand-picked classic stories by sci-fi grand master Robert Silverberg, each featuring a new introduction by the acclaimed author.

In other words, Earth’s first documented encounter with aliens may be closer than ever…making Silverberg’s extraterrestrial speculation necessary for our times!

Order today from Three Rooms Press or from these other book retailers:

Introduction: A Plurality of Worlds

The Way to Spook City

Amanda and the Alien

The Shadow of Wings

Something Wild Is Loose

Schwartz Between the Galaxies

Diana of the Hundred Breasts

The Soul-Painter and the Shapeshifter

To the Dark Star

Beauty in the Night

“With dazzling prose and original plotlines, Silverberg proves himself to be a master of the genre.” —Foreword Reviews

“The leaps of imagination are fresh as ever.” —Publishers Weekly

Robert Silverberg has been a professional writer since 1955, widely known for his science fiction and fantasy stories. He is a many-time winner of the Hugo and Nebula awards, was named to the Science Fiction Hall of Fame in 1999, and in 2004 was designated as a Grand Master by the Science Fiction Writers of America. His books and stories have been translated into forty languages. Among his best known titles  are Nightwings, Dying Inside, The Book of Skulls, and the three volumes of the Majipoor Cycle: Lord Valentine’s Castle, Majipoor Chronicles, and Valentine Pontifex. He has edited four anthologies for Three Rooms Press, including This Way to the End Times: Classic Tales of the Apocalypse (2016), First Person Singularities: Stories (2017), Time and Time Again: Sixteen Trips in Time (2018), and Alien Archives: Eighteen Stories of Extraterrestrial Encounters (forthcoming, Fall 2018). He and his wife Karen and an assorted population of cats live in the San Francisco Bay Area in a sprawling house surrounded by exotic plants.