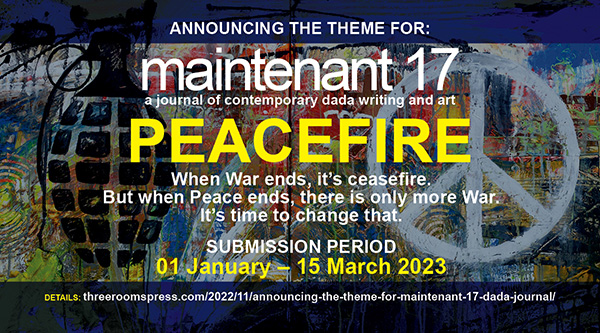 Three Rooms Press is excited to announce details of the upcoming call for submissions to MAINTENANT 17: A Journal of Contemporary Dada Writing and Art.

This issue’s theme is:

When a war ends provisionally, the agreement is called a ceasefire. But when peace ends, there is only war. War and peace are co-dependent. What might be best would be a “Peacefire.” Stand up against the War that never ends and the Peace that never comes. Provocation is simply a media mogul selling fear as clickbait. Peace would make them poorer.

We seek dada-inspired art and writing, beginning January 1, 2023, which explores the concept of “Peacefire.” Artists and writers from around the world encouraged to submit. No submission fee. Limit of 4 submissions per person. MAINTENANT 17 will be published only in print in July 2023.

Critics have praised the series since its inception. Seattle Book Review calls Maintenant, “A smorgasbord for those who are sick and tired of it.” Tribe LA dubs the journal, “A compilation of leading Dada-influenced artists from around the world that is timely and relevant.” Serbia’s Madjan Magazine proclaims that the Maintenant series proves “Dada is not dead.” The Maintenant series is archived in leading institutions worldwide, including Museum of Modern Art New York.

Submission Period: January 1–March 15, 2023. All submissions should be DADA work, inspired by the theme: PEACEFIRE.