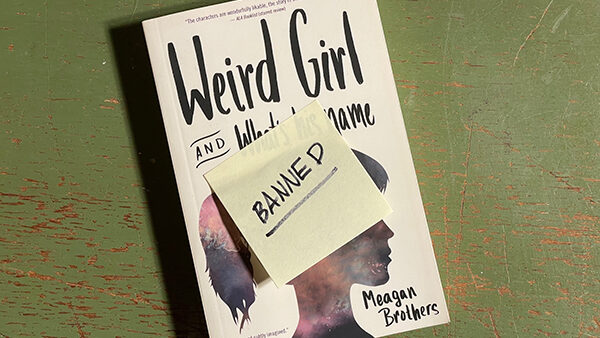 After years of efforts from the American Library Association, the National Education Association, and other respected national organizations, public and school libraries across the country have expanded their collections to include more diverse books. Books like these, which Three Rooms Press proudly ­publishes, provide both “mirrors” to diverse readers, and ­“windows” into the lives of people who don’t share a reader’s race, sexual preference, or economic status. Diverse books teach empathy.

Increasingly, vocal partisan groups have accused librarians of trying to “groom” children by presenting diverse books. Hardest hit have been books by and about people of color and young adult fiction focusing on LGBTQ+ characters. The Three Rooms Press title, Weird Girl and What’s His Name, an award-winning young adult novel by Meagan Brothers, has been challenged and banned repeatedly.

Weird Girl and What’s His Name, set in small-town North Carolina, features Lula and Rory, two teenage best friends trying to figure out who they are in that tenuous time before adulthood. Rory knows he is gay; Lula is questioning her identity and her own sexual preference. Winner of the Foreword Indies Young Adult Book of the Year, named Kirkus Reviews Best Teen Books of the Year, and a Rainbow Book List selection, Weird Girl is critically-acclaimed by leading industry journals. In its starred review, Booklist raved “The characters are wonderfully likable.” School Library Journal ­proclaimed, “Brothers’s pitch-perfect dialogue and well-­polished prose make her an author to watch.” And Rain Taxi noted, “This is not a ‘gay book for teens.’ It’s a book inclusive of teen readers—yes, queer teens and geeky teens—many of whom will recognize themselves and their challenges in its pages.” Inclusivity is the key.

Despite these accolades, Weird Girl has been subject to multiple attempts to keep it off school library shelves in Keller Inde­pendent School District, Texas and Loudon County, Virginia. Three Rooms Press is staunchly opposed to such challenges and bans.

We at Three Rooms Press are proud to publish books that uphold values we believe in: values of equality, tolerance, and empathy. We hope you will join us in our efforts to battle censorship of diverse books. And we also hope that you enjoy Weird Girl and What’s His Name.

NOTE: Three Rooms Press will release an updated edition of Meagan Brothers’s Weird Girl and What’s His Name, including the above preface in support of her novel and all books that are threatened by the politically-motivated new wave of bans on books. We hope you will join us in protest of this blatant form of censorship.