This month 3RP’s Ashlyn Petro got to talk with author Ebele Chizea about her debut novel AQUARIAN DAWN, and passion and courage persevering through the past and the present.

“Ada’s story, every twist and turn, is worth the trip.” —Kirkus Reviews

Ashlyn Petro: This might seem like the most basic starting question but it’s my favorite: what was your access point to Ada’s story? What was it that struck you with inspiration– or have you always been carrying this story with you, one way or another?

Ebele Chizea: I have always been fascinated by the counterculture era of the 1960s and 70s. Also, I had relatives who studied in the United States during that period, and they shared some of their experiences of how the counterculture and the civil war in Nigeria affected them from overseas. It’s a combination of these factors that led to Ada’s story.

AP: Writing about a black woman finding her voice and power through an activist perspective with everything going on today must’ve been a very surreal experience I would imagine. How did this story change during the writing and drafting process?

EC: The story honestly didn’t change much as I believe there is a common link of passion, courage, perseverance, and hope present in activism work around the world, past or present. The only difference for me was writing from a first-person narrative in the voice of a Black woman going through this journey. I had to draw a lot from imagination as I personally do not consider myself an activist in the literal sense of the word.

AP: AQUARIAN DAWN is situated between the parallels and dichotomy of two wars and a woman’s ever-changing life—the turmoil is palpable on every page, but you write with such delicate prose that it’s still a very enjoyable read. Was there any point of telling this story that caught you off-guard emotionally? Where the action felt too close, too real? 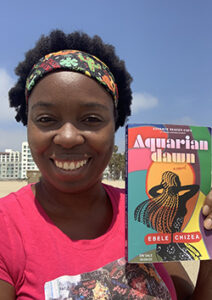 EC: Yes absolutely! There were moments when I had to pause and breathe. Writing from the perspective of a Black girl, an immigrant coming of age in a predominantly white culture and then returning home to find herself, were aspects that I could relate to. Some of those moments caught me off-guard emotionally, especially areas where Ada struggles with her physical appearance and hair texture in the backdrop of a Eurocentric worldview. Also describing some details around war was a bit triggering, as I had to draw from the experience of relatives who experienced the Nigerian civil war between 1967–1970. Nabuka, though a fictional African country, draws a lot from the Nigerian experience.

AP: We meet Ada in the late 1960s—a time period any younger audience has not been alive to experience. How do you think writing in a different decade and era in American Culture changes the reception of the overall (and yet timeless, I believe) themes of resilience, determination, and discovery?

EC: I am not sure how to exactly answer that question. All I can say is that I think, or rather hope that it will help younger people to appreciate the efforts of the generation that pioneered a new, radical way of activism… a blueprint, that many follow today.

AP: How does it feel to know that Ada and her story is out there in the world? Is there anything you’re secretly hoping rises off the pages and hits readers—the hidden gem of your amazing story (with already so much to take with you after the last page)?

EC: It feels really great! I wrote this novel 12 years ago, and it basically stayed in my flash drive the whole time until I was inspired by a good friend to find a publisher. After a few revisions, I went about the process. The rest is history. My hope is that people read the book not just with their intellect, but with their hearts. It is ultimately a book about love—love between people, love of humanity and connecting with one’s purpose.

AP: What’s next for you? Do you have long periods of rest between creative projects or are you someone who is always in the middle of a project, one way or another?

EC: I am a multi-faceted artist, so I am always working on a creative project. But when it comes to writing, I do take some time in between, just because I pour so much into my writing that I find it necessary to decompress afterwards. I do however, have a couple of completed manuscripts sitting in my flash drive that I hope to begin editing soon.

Ebele Chizea was born in Nigeria and moved to the United States at age sixteen. Since graduating with honors in 2004 from Thiel Colege in Greenville, PA, she has published fiction, poetry, and essays in various publications including The African, The Sentinel, The Nigerian Punch, Sahara Reporter, as well as her own online publication, Drumtide Magazine, which featured  interviews with prominent figures in the entertainment and literary fields including Afro-punk pioneer Lunden DeLeon, afrobeat musician Seun Kuti, and award-winning Nigerian Belgian novelist, Chika Unigwe. She is the author of How to Slay in Life: A Book of Proverbial Wisdom. AQUARIAN DAWN is her debut novel. She currently lives in Santa Monica, CA.