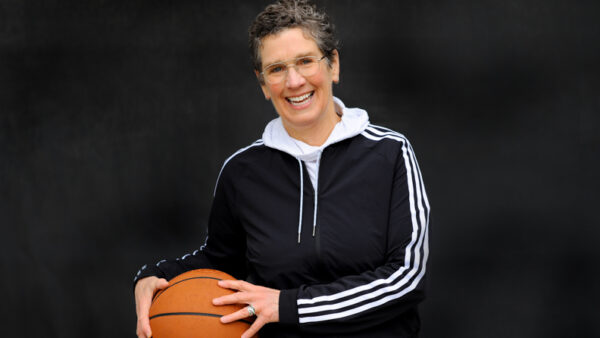 Lucy Jane Bledsoe’s newest novel NO STOPPING US NOW tells the life of Louisa, a high schooler whose efforts to get her school to comply with 1972’s Title IX and create a girls’ basketball team are met with resistance from every angle—the school board, male coaches, and her peers. The novel captures the zeitgeist of the 70s, sharing the cultural and political lives of Louisa’s Black and queer teammates. NO STOPPING US NOW is Bledsoe’s true-to-life battle with speaking truth to power and gaining respect for the women in her school and her sport.

Three Rooms Press’s Ashlyn Petro spoke with Lucy Jane Bledsoe about intergenerational activism, the happiness that comes from fighting for what’s right, and the process of writing a fiction novel jam-packed with real life. Check out the full interview below! 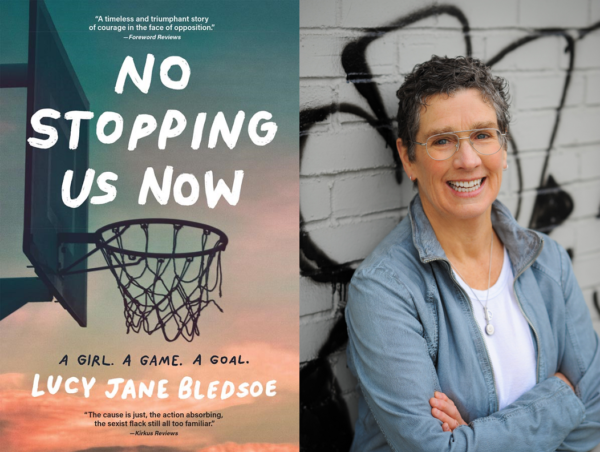 Ashlyn Petro: NO STOPPING US NOW tells such an inspiring and poignant story for the present day of equal rights and equity in sports. What was the moment this story from your past came to the forefront and said: I must be written?

Lucy Jane Bledsoe: Even 50 years ago, as a kid activist, I knew I’d want to tell this story, which I guess is why I kept a scrapbook of my campaign to get to play basketball and bring my city into compliance with Title IX. But it took me years to figure out how I wanted to tell the story. Recently, though, as I watched a whole new generation fight some of the same battles, I knew I wanted to be in conversation with younger people carrying on with the activism for gender equity. So I wrote my story for young people today, in the hopes that we could share our stories with each other. I’m planning several events for the book where teens join me at the microphone so we can have those conversations.

AP: This book is a fictional telling of a true story: how did you decide where to parse your life into reality and fiction—without feeling like you were losing the core of the story (which is you and the power of your team)? Or did you have the experience where it was easier to write about a fictionalized version of the story, having that freedom to explore the past without having to stay to reality?

LJB: I find writing about myself, writing nonfiction, difficult. Somehow I lose the thread of the story in the tangle of all my other experience. Also, because people are so subjective, I often feel like fiction can be truer than nonfiction. With fiction, I can dig into the emotional story more fully by writing dialogue and scenes of intimacy. I can also compress time a bit to make a tighter story, pulling in a couple issues from a year later in my life and overlaying it with the central story. If I told this story as nonfiction, it would be drier and I really wanted to connect with young readers by offering a juicy story. There is nothing not true in this story, it’s just the mix is organized in a way to make it the most compelling possible. 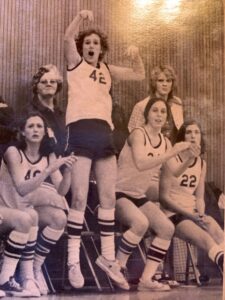 AP: Similarly, as a writer myself, I’m curious about your general process! How did you find the individual threads that would construct your story—I mean, you have your whole life as a teenager to sift through! It’s a huge undertaking.

LJB: Yeah, I hear you on this one! It’s my tendency to put in the kitchen sink. Which I often do in first drafts. Then as I rewrite I try to figure out what can go, and sometimes that’s a painful process. There were so many threads I didn’t want to take out, but I also knew that the story would be lost in the forest for all the trees if I didn’t tighten and focus. The editors at Three Rooms Press were very helpful with this, for example asking me to delete my entire first chapter. They were right. It needed to go.

AP: Were there any moments writing NO STOPPING US NOW, of digging into the past, that you saw glimpses of where we would be now in terms of sports equity—a glimmer of something you might’ve missed back then, being 17 and unaware of the possibilities of today?

LJB: When I was 17, there were no conversations about inclusion of trans athletes, but that story is very much parallel to my story. I see the process of gender equity as an evolution as awareness grows (hopefully) in our communities. Each generation carries the story forward (again, hopefully). But that said, I think sometimes the words used to talk about gender equity sometimes get in the way of different generations realizing they really are on the same page. That’s why I love storytelling as opposed to theorizing—when people share their personal experiences, I think it’s easier for others to take in our beautiful differences.

AP: Alternatively, were there any moments writing when you saw the 1970s reflected back into present day, things that still need changing?

LJB: Oh my gosh, yes. There is so much work to do. That part actually makes me sad, viewing my innocence back then when I thought we were getting closer. We were. And we are. But the process is ever so slow and the people who want to block fairness are fierce. But we are more fierce! 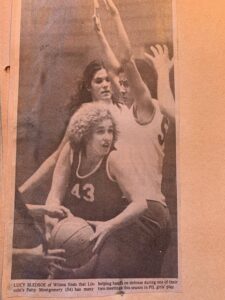 AP: Such a huge character in your novel is Title IX; you humanize something that is usually seen as a guarded and untouchable law. How did it feel to you when you were 17? And how did your company of activists and feminists change your relationship to those 37 words?

LJB: I was raised in a big family (seven of us) who talked politics at the dinner table every night. So I was comfortable with the idea of laws translating into daily behaviors. At the age of 17, I felt proud of the teams of women who made those 37 words into law. I was excited about taking the small steps in my state of Oregon to bring them into practice. I learned so much about how change is made that year, and I had amazing mentors, including Gloria Steinem, and also teams of women who were also taking small steps. I learned about the blowback, which came in the form of personal attacks and all sorts of lies, and how to keep going in spite of all that. How to find joy in the allies, some coming from very surprising places, rather than focusing on the obstacles, human and otherwise.

AP: What words of assurance would you pass along to young (or older!) activists that are facing the same kind of resistance you faced in high school—from local teachers to school boards to society at large? What’s something you wish you knew at age 17?

LJB: Such a good question! For me as an activist now, what keeps me going are the multitudes of others who are working for the same goals—gender and racial justice. There are so many good people doing amazing work, and rather than allowing myself to devolve into the rage against the haters and the obstacles, I try to stay connected to the amazingness of the folks who are taking the steps, big and small, to keep the ball rolling forward toward greater justice. Studies show that people who do the right thing, who take care of other people and work for fairness, are happier. That’s good motivation.

AP: What’s next in your writing life? Has a new story come to you since finishing NO STOPPING US NOW?

LJB: I have an adult novel coming out a year after NO STOPPING US NOW. I’m excited about the timing because while it’s nothing like a sequel, the protagonist is a basketball coach, so it’ll give me an opportunity to keep promoting NO STOPPING US NOW. The story is about two adults, both queer, who had been friends at a Christian camp where they were subjected to conversion therapy. They escaped the camp together but haven’t seen each other since. In the novel, their lives come closer and closer together. I’ve been working on this book for a number of years and am looking forward to sharing it with readers.

Lucy Jane Bledsoe is the award-winning author of eight books of fiction for adults and six previous books of fiction for young people. Ms. Magazine called her novel, The Evolution of Love “fabulous feminist fiction.” The New York Times said her novel, A Thin Bright Line “triumphs as an intimate and humane evocation of day-to-day life under inhumane circumstances.” She’s been a writer in residence in Antarctica and Cuba, and is an active writing workshop leader, with a passion for travel, basketball, storytelling, and social justice activism. She lives in Berkeley, CA.