↓
Home→Author Interviews→Stand Up Comix: An Interview with Author Alex Segura 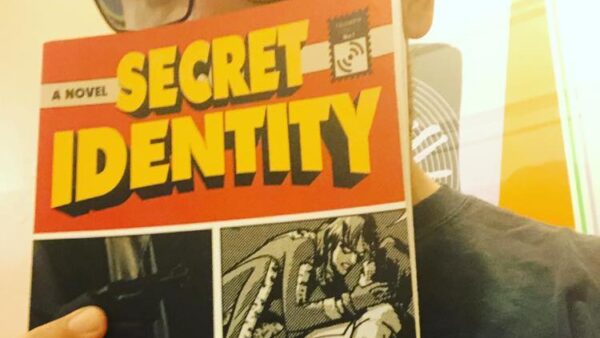 Three Rooms Press turns the December Author Spotlight on Anthony Award-winning mystery writer and comic book creator and the busiest person in the business Alex Segura as co-director Peter Carlaftes joins him to discuss his latest projects. Segura is the author of Star Wars Poe Dameron: Free Fall, the Pete Fernandez Mystery series (including the Anthony Award-nominated crime novels Dangerous Ends, Blackout. and Miami Midnight), and the upcoming Secret Identity (Flatiron Books). His short story, “The Camelot Complex” appeared in the Three Rooms Press anthology, The Faking of The President, and “Quarters for the Meter” was in 3RP’s Bouchercon Anthology Florida Happens. His short story “Red Zone” won the 2020 Anthony Award for Best Short Story, and his border noir short story, “90 Miles” was included in The Best American Mystery and Suspense Stories of 2020. He has also written a number of comic books, most notably the superhero noir The Black Ghost, the YA music series The Archies, and the “Archie Meets” collection of crossovers, featuring real-life cameos from the Ramones, B-52s, and more.

PC: Let’s talk about your new novel SECRET IDENTITY which I thoroughly enjoyed. The main character Carmen Valdez is such a dynamic presence.

AS: Carmen showed up fully-framed in my mind all focused and driven. I never thought that would happen again, because I figured it’d only happen once with Pete, my series character. But she showed up and she was just so different than him, and so special—I knew I needed to explore who she was, and that journey became SECRET IDENTITY

PC: So she has moved from Miami to New York City to pursue her dream of writing a superhero comic book in 1975. Why did you choose this particular juncture in time?

AS: Well the comic book industry was really struggling at that time after the glory years of the 50s and 60s. Comics were struggling. It wasn’t like today, where we have shows about Peacemaker or obscure characters – it was considered a dying industry. So I wanted to use her passion for the medium and contrast it with comics at its lowest point, and then show her fighting to control this one thing she loves.

PC: So this struggling industry became the perfect setting to establish Carmen’s struggle. Especially then in such a male-dominated profession.

AS: Yes, exactly. Carmen comes to New York to work in comics, but even though she snags a job as a secretary at this kind of third-rate publisher, Triumph Comics, she still doesn’t get the chance to write—which is what she wants. Her boss basically says, listen, why would I give you work when I have a line of guys around the corner who’d die to work here? So she has to find another way in – and that path is fraught.

PC: I love the graphic elements of SECRET IDENTITY and they perfectly augment Carmen’s world after her partner and illustrator in the project is murdered. But I don’t want to give too much away. I also love that you give your series detective Pete Fernandez a nod in the book. And you’ve written five terrific novels with him.

AS: Thanks so much. Pete is near and dear to my heart, and in my mind, SECRET IDENTITY happens in the same “universe” as the Pete books, so I’m glad you saw that. I love Pete because he’s so resilient—he overcomes these traumas – addiction, violence, other personal issues—and still hangs on, striving to be a better man. I think we can all relate to that, to some degree. Pete powers through his personal problems and tries to do the right thing—which isn’t easy in life and I can relate to that. I try to support the community and be helpful.

PC: Well you are definitely one of the most supportive people in the writing community.

AS: I truly appreciate that, Peter. It means a lot. I am so thankful for the help I got on the way here—from authors who didn’t even need to pay me a minute of attention—so I try to pay it forward as much as I can. We need each other to succeed, I think. Nothing happens in a vacuum.

PC: Everyone that follows you on social media knows that is your backbone. And not only are you one of the most caring but also one of the busiest. You just took on a new job with Oni Press. How’s that going?

AS: It’s been great, honestly. I’ve known James Lucas Jones, the publisher, for a long time – and we got to talking and it seemed like the right time for a change. We’re putting out so many exciting books and it’s such a creator-friendly place, I can’t think of a better spot for me right now. I’m excited to talk about what’s to come in the future very soon, too.

PC: Before that you were with Archie Comics. How did that gig come about?

AS: I grew up on Archie and will always have a special place for them in my heart. My first comic was a Betty & Veronica digest. I was a fan! So, while I was living in Miami I ended up doing some freelance PR for the company before eventually moving to New York to work at DC. But I always kept in touch with people at Archie, always kept tabs on what they were doing. And then the stars aligned and I was able to move over there for an extended run – I think, aside from a two-year return to DC, I was at Archie for close to a decade.

PC: I love the music crossovers you wrote, like—Archie Meets Kiss. Also The Ramones and The B-52s. They’re fun to read! Let’s talk about your Star Wars book POE DAMERON: Free Fall which dropped in August.

AS: Writing Poe was just a dream—to be able to not only craft an adventure in the Star Wars mythos, but to be able to tell his definitive origin story was amazing. I tried my best to blend all the established bits about Poe, to respect what had come before, but also add my own voice and ideas to what was asked of me. I’m pretty happy with the end result.

PC: Wow! What a year you are having. Your story “90 Miles” from the Both Sides anthology was also included in the Best American Mystery and Suspense 2021 anthology. Plus you’ve also started two other new book projects. I mean I would totally cast you as Superman at the rate you are going. What exactly is The Dusk?

AS: The Dusk is basically my attempt—in tandem with some very talented people—to flip the script a bit on the idea of the urban, street-level crimefighter. I read a lot of comics, I read a lot of comics with my son. And when doing the latter, I have to really edit what we read as we read it, because I don’t want him to think that you solve all your problems with violence. Or that the way to “fix” things is to throw someone in jail, or toss someone with mental illness into an asylum. I think we wanted to not only tackle that, but do it in a way that a kid can read it, so it’s not super-grim or violent, but entertaining enough that people of all ages can enjoy the story.

PC: That’s a very groundbreaking approach. And you also have Micro-Face on the fire. Tell us about this project.

AS: I was a guest on NPR’s business podcast, Planet Money. They did a series on comic book IP, and the hook was they were trying to buy a superhero. I basically told them that no one would sell them IP—or a superhero. There’s too much upside to put a price on it. You’re literally one story away from creating a billion-dollar franchise. So they took another route and refurbished Micro-Face, a character from the Godlen Age of comics that had fallen into the public domain. They asked me to write it and help them put together the creative team—we even got the blessing of the character’s creator’s daughter—and now we’re putting the finishing touches on the first new Micro-Face comic in over 50 years.

PC: Now that is cool. Three Rooms Press has been so fortunate to have one of your fabulous short stories included in two of our past noir anthologies: The 2018 Bouchercon Anthology FLORIDA HAPPENS edited by the legendary Greg Herren and THE FAKING OF THE PRESIDENT edited by yours truly. Alex it’s been a real privilege having you feature this month as our Three Rooms Press Spotlight Author.

PC: And not to blow our cover, but Alex and I are discussing another possible project which could very well take place in the near future if only he has a moment open on his schedule. Details to come!

And if you can pre-order Alex Segura’s rollicking literary mystery set in the world of comic books SECRET IDENTITY here.

And last but especially not least, check out the frenetic JFK story “The Camelot Complex” by Alex Segura in THE FAKING OF THE PRESIDENT anthology edited by 3RP Co-director Peter Carlaftes here.