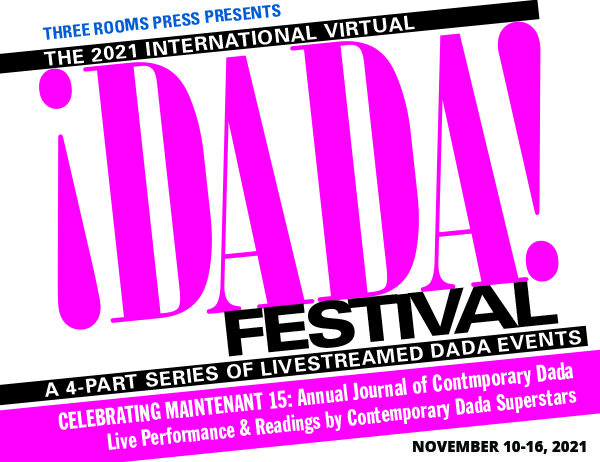 Three Rooms Press is proud to sponsor the 2021 International Virtual ¡DADA! Festival: A series of livestreamed dada actions by contemporary dada artists from around the world. The festival will include close to 100 artists and writers from 14 countries, performing over a series of seven events live-streamed on YouTube and Facebook. The series will highlight the art and writing of contributors to MAINTENANT 15: A Journal of Contemporary Dada Writing and Art, published annually by Three Rooms Press since 2008, and will be hosted by MAINTENANT 15 editors Peter Carlaftes and Kat Georges.

Events will include performance, art, and poetry inspired by the theme of this year’s journal “HUMANITY: The REBOOT” Prepare for the provocative, eclectic, and unpredictable collage of performances by more than 50 artists in a series of lively sessions tracking European, South American, Canadian and US performers. Admission to all events is free. All events will be livestreamed to both Facebook and Youtube. Copies of MAINTENANT 15 will be available to order during all events.