↓
Home→Author Interviews→Questioning Stories that May Seem Set in Stone: An Interview with Kelly Ann Jacobson
Share This!

Tink and Wendy, coming this October from Three Rooms Press, follows author Kelly Ann Jacobson’s brilliant queer re-imagination of the Peter Pan tale from the perspective of Tinker Bell. Meeting Wendy’s granddaughter Hope Darling as she cares for the graves of her two loves, Peter and Wendy, Tink recounts the tale as it really happened—revealed to the reader through past, present, and book excerpts from Neverland: A History. Sitting down with 3RP’s Merritt McDowell, Kelly Ann Jacobson spoke about the process of writing Tink and Wendy, the importance of LGBTQ representation in YA literature, and her own writing style! Find the full interview below, and preorder Tink and Wendy here. 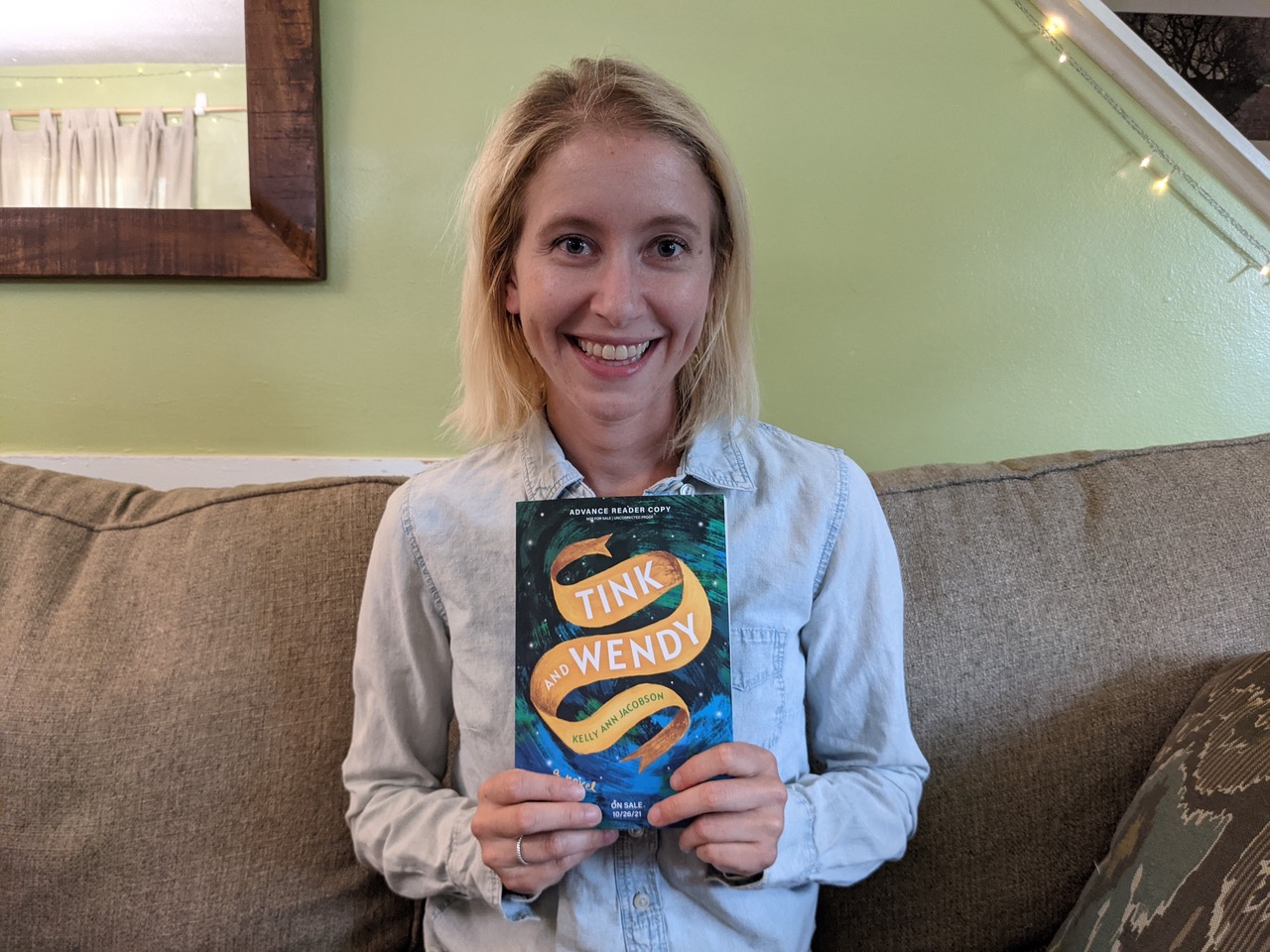 Kelly Ann Jacobson with her new novel TINK AND WENDY.

Merritt McDowell: What did the writing process for Tink and Wendy look like? How did you prep? Any rereads of J. M. Barrie’s original Peter Pan or rewatches of the Disney movie, or did you just jump right in?

Kelly Ann Jacobson: I definitely read the original Peter Pan, but I did so lightly—getting the basic ideas of the text without really studying it too much—because I wanted to use the original as a springboard to completely reimagine rather than just retell. I very specifically avoided rewatching the Disney movie for the same reason. I wanted this queer retelling to be new—something that’s ours—rather than just a familiar story that happens to have queer characters.

MM: The Tink we see in Tink and Wendy is quite different from the Tinker Bell character we’ve seen before—she’s hardened and tough with an “appreciation for a good, stiff drink” as Tara Campbell described her. How did you develop her character, alongside the other characters that populate your novel?

KAJ: The very first chapter I wrote was actually the chapter that became Chapter Two, which describes Tink’s current state as she wakes up alone in a cabin and prepares to visit the graves of Wendy and Peter. I had no idea where I was going with the plot at that point. I knew some kind of love triangle had gone badly, and that I didn’t want to center Peter in my reimagining, but that was about it. Then I worked backward.

I think starting the book with an emotional state—Tink’s overwhelming sadness and anger even after so many years—put me in a good place to keep her emotions central. She’s also my favorite type of character to write.

Peter was pretty easy to write as well for an entirely different reason: I already knew what aspects of the traditional Peter Pan character I wanted to complicate. Of course, I didn’t want him to be a caricature built only by his problematic actions, but at least I had some guiding points.

Wendy was by far the hardest because she had to do so much in the book—be a support system for her brothers, fall in love with two completely different people in two completely different ways, grow so much over the course of the novel while still kind of being the most consistent character of the three. She is also the least in-your-face of the three main characters. She doesn’t just say what she’s thinking all the time the way the other two do.

MM: What do you hope young readers and old will take away from your novel? With the immense importance of LGBTQ+ representation in YA literature, what has been the most impactful or rewarding aspect of retelling widely-told stories with LGBTQ+ adaptations in your experience with Tink and Wendy?

KAJ: So, I never intended to write young adult novels. Not at all. I started out as a writer of adult literary fiction, and it was only when I visited a queer young adult group to talk about my first adult novel, which did have a queer main character, that I got inspired to change my audience. They asked me whether I wrote young adult books, and then, when I said no, they described how they would go into the bookstore and see no books that represented them (this was before the big wave of queer YA going on now, which is wonderful!). That was the day I changed my entire career completely. I began writing YA fantasy and science fiction novels under a pen name and learned what in the world it meant to write YA, and when I was ready to move back into literary fiction, I combined the two to create Tink and Wendy, which has a lot of literary elements (especially the excerpts from Neverland: A History) but is still clearly a YA novel. It’s funny that I never intended to write YA because I’ve always loved YA novels so much!

One of my priorities as an author has always been to travel to talk to queer young adults, even before I published YA novels. I talk to them about writing, yes, but also just about being in the world. I usually show up with a presentation because that’s what’s suggested but then just end up answering a ton of questions, and that’s wonderful—it’s important to me that I let them dictate the format. I am there for them.

Another one of the most important messages of Tink and Wendy is that our beloved stories can also be really problematic. They can exclude. They can promote dangerous stereotypes. It’s important to question the things about a story that seem set in stone just because an author wrote them in a book a long time ago. These are just stories, and we can change them any way we want.

MM: You’re also a writer of short fiction, and have been published in places such as Best Small Fictions, Daily Science Fiction, Northern Virginia Review, among others. How does the process of writing short fiction differ from novel-writing? Do you have one preference over another?

KAJ: What a wonderful question. My preference is actually for novels-in-stories or linked short story collections—lots of little pieces that work independently to form a whole. Part of this comes from my attention span—which is very short—and part of it comes from my love of flash fiction and poetry, both of which require so much attention to the small details of word choice and sentence structure. It’s much easier for me to sustain that attention when I’m writing small—even if all of the small pieces add up to a very large book.

MM: The structure of Tink and Wendy alternates and spans between both time and medium, taking readers into Tink’s past and present as well as through excerpts from Neverland: A History—did you ever find it challenging to switch between perspectives, tones, and settings? Was there one particular viewpoint you enjoyed writing from the most?

KAJ: I actually find this switching back and forth to be my natural way of writing. Almost all of my books have some component of switching—for example, my dissertation novel is told in a series of epistolary fictions, including a police report and a movie script!

In this case, I did write the “Then”/“Now” chapters first in order to stop myself from interrupting the flow of the stories and then completed the Neverland: A History chapters all at once in order to make sure those also told a subtle story about Godmother Anne’s involvement in Tink’s life, and also a second subtle story about the underlying social structures of Neverland, but that method of adding in after-the-fact instead of during the writing process is actually unusual for me.

In terms of a favorite, I think it would have to be the “Then” chapters because I felt like I was sitting by a fire listening to Tink’s story just like Hope Darling does. I really did enjoy all of them, though, for different reasons.

MM: And lastly, is there anything else in the works we can expect soon, any projects you’re currently working on?

KAJ: I write a lot of very weird things, some of which get published and some that don’t. Ideas just pop into my head, and I sit down at my computer and say, Alright, let’s see what happens. My partner just sighs when I say something like, You know what would be great? A love triangle between Peter Pan, Tinker Bell, and Wendy! out of the blue and then start writing it immediately with literally no plan for how that book is going to go (This is actually what happens). That’s one benefit of not relying on my books for my primary income—I can follow whatever strange experiment I want to and worry about finding the right home later. For example, I’m currently working on a chapbook of flash fictions reimagining The Odyssey, which has been…interesting. Who knows where that’s going.

I also have another young adult contemporary reimagining that I describe as “Queer Robin Hood meets The Fast and the Furious” that I’m shopping around to agents, so who knows.

Writing has been slow for me this summer in the way I think it has for a lot of writers, plus I also just finished up my PhD in Creative Writing and have spent a lot of time securing an academic position for next year (Which I finally did! Yay!). But I’m always thinking about writing, even when I’m not able to spend all day doing it. It’s my greatest love!

Keep up with Kelly Ann Jacobson on Instagram and Twitter, and be sure to preorder Tink and Wendy, out October 26th!