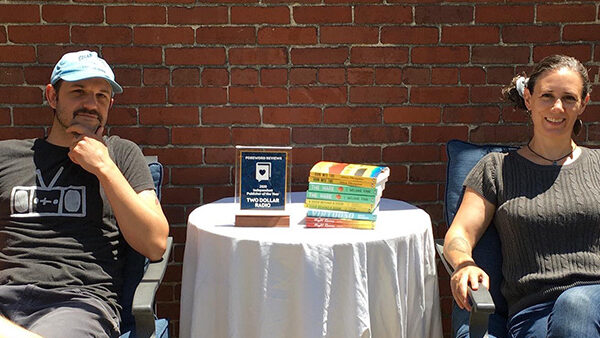 Welcome back to our Indie Press Spotlight! This month, we spoke to Eric Obenauf of Two Dollar Radio about publishing art with a distinctive vision, community connection, and looking beyond the pandemic to what’s next. Two Dollar Radio operates their press, their film division, and community events out of Columbus, Ohio. Find out more about them here, and check out the interview below!

Mary Rose Manspeaker: What sets you apart as an independent press and bookshop? What do you look for in submissions, as a publisher of bold, creative literary work?

Eric Obenauf: We try to publish books “too loud to ignore,” and are looking for strong authority over language and story, and a distinctive vision. If it’s a story we’ve heard before, how is it being delivered in a way that sets it apart.

MRM: How does Two Dollar Radio interact with the greater Columbus community?

EO: A big reason we wanted to open our storefront was to have a footprint in our community, and to engage with folks around culture and issues of concern. Pre-pandemic, we had 4 recurring book clubs, a monthly poetry slam and comedy night, in addition to traditional author readings. We’ve hosted fundraisers for our neighborhood public school, as well as local progressive candidates. Probably the most people we crammed into our space on a given evening was for an Election Night Viewing Party we hosted during the midterm elections in 2018 — people were sitting on the floor and under tables. We’ve been a part of the efforts to orchestrate a community literary mural on the Near Eastside of Columbus that features a quote from one of our publications, They Can’t Kill us Until They Kill Us by Hanif Abdurraqib, which will be unveiled at a public ceremony late-August. And we put on a 4-day music, literature, and film event called Flyover, which brings artists like Open Mike Eagle and Danez Smith to Columbus.

MRM: You’ve held Flyover Fest in past years, and offer a publishing mentorship program. How do these community endeavors strengthen your pursuits as a publisher, and how does your platform as a publisher open up opportunities for collaborative work beyond editing and publishing?

EO: I think it’s part of being a good community member, not just here in Columbus, but within our broader, national literary community. As the corporate publishers continue to consolidate from the largest 6 to the largest 4, it will be possible for more publishers with vision to arrive from nowhere, untested, like we did, and make an immediate impact. Publishing shouldn’t just be for rich kids, or folks living in New York. There were people like Johnny Temple at Akashic who pointed us in the right direction when we were starting out, whether that was through tipping us off to quality submissions, or which printers were credible. The mentorship program is hopefully an opportunity to pay that forward, but to also hopefully encourage people to take the plunge and let them know that there are some outlets for assistance along the way.

I think how these strengthen our pursuits as a publisher, are they help us to feel more tied in to our local community and with readers, and also be inspired by the work of other artists. After having published books for about 10 years, I was beginning to feel as though we were just pushing books out into the world, and disconnected from readers and the conversations happening around them. So, it also helps you feel less alone. I’m generally an optimistic person, but I’m not sure everyone believed our business plan was thorough when we decided to open a bookstore/café on the Southside of Columbus that only served vegan food, that almost solely carries independently-published books and progressive literature. We’ve also got a lot of weird photography and art books you won’t find anywhere else in town. It’s been heartening in ways I have trouble expressing to see how responsive and supportive our community has been to the experience. Not everything is sunshine and rainbows here, but I probably love and admire our town — because of the people — more than I ever expected could be possible.

MRM: In what ways does the film division tie into the literary aspects of Two Dollar Radio? What led to the press’s interest in film production, and are their ways in which the editorial visions of the two complement one another or differ?

EO: My background is in film, and I wrote for children’s television before really getting into books. A lot of our books are described as “cinematic,” and I believe that’s apt, whether through the vision or the manner in which the story is told. Historically, we wanted the film side to be sort of like how Barney Rosset at Grove Press would commission a film from Samuel Beckett. So, enabling artists and visionaries without access to the medium to experiment and play. We’re still pursuing this, but have raised the stakes a bit and are working with outside producers on a couple projects. If those projects come to fruition, ideally they will in turn make it possible for additional and maybe stranger projects down the line.

MRM: How have you adapted to the COVID pandemic landscape, and what are your goals for the future? Has the past year and a half changed your outlook?

EO: I think we’re still processing, but I will say that the pandemic forced us to slow down and re-evaluate some of our internal organization and processes for the better. I feel more confident as a publisher than I ever have, and I’m incredibly energized by what we have coming up. 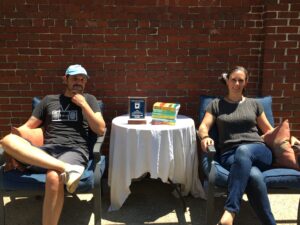 MRM: Tell us about your most recently publications and what’s in the works—feel free to plug your new books, films, and projects!

EO: Our next release is a story collection called Born Into This, by an Indigenous writer from Tasmania, named Adam Thompson. The stories vary widely, such as ‘The Old Tin Mine,’ which follows an Aboriginal guide who leads wayward urban teens on survival trips in the wilderness in hopes of connecting them with their heritage, to the title story, which features a woman fighting for a shorter workweek so she might re-connect with the natural world, who subversively plants native growth in a wilderness preserve. Writing for The Guardian, critic Thuy On said “[Born into This is] a potent collection by an author who mined the richness of both his ancestry, his work within the Aboriginal community and his island home for tales about black and white relations, colonialism, class friction, racism and the despoilment of heritage and environment.”

Then, we have a busy fall: we’re reissuing a novel by Amy Koppelman called A Mouthful of Air, which she adapted into a film that she directed starring Amanda Seyfried, that has been compared to seminal feminist works such as Charlotte Perkins Gilman’s “The Yellow Wallpaper” and Sylvia Plath’s The Bell Jar.

In September, we’re out with a collection of prose and poetry by Sean Avery Medlin, called 808s & Otherworlds, that confronts media representations of Black masculinity.

In October, we’re out with a debut novel called I Will Die in a Foreign Land, by Kalani Pickhart, which I describe as The English Patient set during the Euromaiden Protests of 2013-14 that led to the Ukrainian Revolution of Dignity.

And in November, we’re publishing the paperback edition of Melanie Finn’s acclaimed third novel, The Underneath. It’ll be a busy rest of the year for us.