↓
Home→Author Interviews→Towards What the People Want: An Interview with Vanessa Baden Kelly 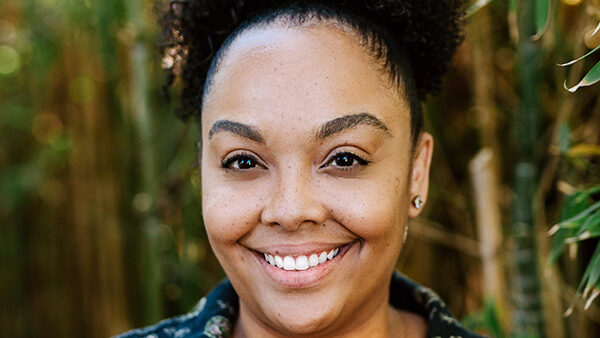 FAR AWAY FROM CLOSE TO HOME, coming from Three Rooms Press this May, is a searing, intimate collection of essays from Emmy Award-winning writer and actress Vanessa Baden Kelly. Threading the idea of the search for home, and what that means for a Black millennial woman in America, she uses the space in the essays to explore her time as an activist advocating justice for Trayvon Martin and Martin Lee Anderson, her marriage, her career in entertainment in LA, and more. She spoke to 3RP Lead Editor Mary Rose Manspeaker about her book, her inspirations, and her future projects. Preorder her book here, and check out the full interview below.

Mary Rose Manspeaker: You write about how your understanding of LA, its neighborhoods and people, has grown since you first moved there. Has your knowledge of yourself also evolved from moving around the LA area? Have your thoughts changed now that moving around the city has been much more limited?

Vanessa Baden Kelly: Absolutely. I think the longer you stay in a place, you absorb its culture until you are synonymous with it – you’re from there. I don’t feel like I am from Los Angeles but I certainly feel like an Angeleno, specifically because I am raising my kid here. I think what LA has taught me about myself is how to find what I like and what I’m comfortable with and be true to that. A friend of mine has said that whatever you’re looking for, Los Angeles has it. I have found that to be true but whether you can access it or not is entirely different. As you’re working to be “where you want to be” you encounter places and people and culture you wouldn’t otherwise and become an amalgam of those experiences until one day you look up and say “I don’t want what I thought I did anymore. I like this better. Or that. Or a mix of several things. Where I come from in the South, success is somewhat homogenous. Here it’s different. And I love how that has changed for me.

I don’t think the Stay at Home order has changed that. In fact, I think it’s made me love the city more. Watching Angelenos work together to help each other and local businesses has helped me see how possible it is to have tolerance. The same is true for the Summer uprising. When people from all over the city were willing to march every day or go to beloved restaurants outside of their community to keep their doors open…I knew this would be my home forever. LA is what I had always been looking for.

My job was to teach people to organize so that they always understood their power. Essential, to organize myself out of job. I couldn’t go into some community and tell them what I thought they should do. I had to hear their problem, what their desired outcome might be and help them find the resources to reach it…ultimately we are going to work towards what the people want. And there is no way to do that wholeheartedly without living with them. Getting to know them beyond their trial. Understanding their hearts and their point of views even if it is different than yours. And that’s ultimately what a good writer does.

MRM: Your essays span some heavy and heavily personal topics—love, grief, lineage, community, and intergenerational trauma, to name a few. I’m curious how each one began. Does the writing process start with you setting out to write about these broader concepts, or does that come in through the way these things are inextricably tied to the more personal parts of the stories you tell?

VBK: I feel like I live my life in seasons. Maybe that’s the church girl in me. Maybe it’s the TV writer. But every season of my life always seems to have a natural through line. Some seasons have been about exploration or acceptance or resilience or loss. I am CONSTANTLY trying to figure things out. How are these things connected? What should I have learned from this? Could this lesson apply to that challenge? So my essays tend to be the aha moment. When I figured out what I suppose I was supposed to in that instance – even if the answer was there is no answer at all. Something I have found in my writing is that my first draft is never close to the final. My last page – sometimes last PARAGRAPH are the building blocks of the actual essay. I have to get all my wild thoughts and personal assertions out first…and then I can dilute it to a single thought that I can build on more objectively. So my second draft and so on is actually more of a research document. Now that I can think this through with precision and I understand how I feel, what do I suppose were the feelings of others? How did this affect everything? So there is still discovery in my process, but like most things in my life, it’s modular and stepped-out process.

MRM: How do you feel that organizing and writing/storytelling can inform one another? Are there any lessons you learned as a young political activist that you feel have been particularly valuable to you in other parts of your life, or may be valuable to young organizers today?

VBK: I think they are near synonymous in their first step. The school of organizing I came from was not to spread a particular rhetoric in any direction except freedom. My job was to teach people to organize so that they always understood their power. Essential, to organize myself out of job. I couldn’t go into some community and tell them what I thought they should do. I had to hear their problem, what their desired outcome might be and help them find the resources to reach it. Sometimes that might include further education (re: if someone is poisoning your lake, you may just want them to clean it up, but you should also know you’re entitled to much more), but ultimately we are going to work towards what the people want. And there is no way to do that wholeheartedly without living with them. Getting to know them beyond their trial. Understanding their hearts and their point of views even if it is different than yours. And that’s ultimately what a good writer does. They get inside the story. Characters are 4D. Plot is driven by their unique POVs and how this person might feel or move considering things that we have yet to see. The ability to not create static characters – people who only serve as a foil or have no agency – is something we do in real life too. We have good guys and bad guys. That’s it. What makes life and story so complex (and entertaining) is when no one is fully one way or the other. Organizing is a masterclass in that.

MRM: As well as an essayist, you’ve worked as a screenwriter on the series Giants, among others. How do you feel that the two modes of writing intersect or differ? Do you feel more able to delve into certain topics in one vs the other?

VBK: I think prose is far more cerebral. One of my best friends suggested Normal People (the series) to me after having read the book because he was pleased by how the series handled otherwise very heady prose. I did both – watched the series and read the book – and I felt the same. But what was interesting was the series had to handle aspects of the words differently to evoke the same emotion.  In a book, the words themselves are the power. A beautiful sentence resonates for the rest of your life if Morrison wrote it. How the book ends is far less important than what happened within. A series, and episode…it’s about the end. If it doesn’t end well, beautiful moments can be largely forgotten. So for me, I feel prose is where I go to discuss matters of the heart or thoughts. Screen is where I go to discuss topics of interest and scenario. One is plot, one is emotion. But I certainly pull from prose to make things more beautiful. Because there is nothing more beautiful than prose, and you can always tell (in my opinion) screenwriters who are not avid readers. Their work lacks a certain poeticism (to be clear not all work needs to be poetic so that’s not a knock on non-reading screenwriters at all as I love some DEARLY)

MRM: Speaking of Giants, what was the feeling of winning your first Emmy?

VBK: It has been two years and I still look at it on my mantel and wonder how it got there.

MRM: In “Unreliable Narrator,” you name some of the writers who inspired you, or who you see yourself in the legacy of—Morrison, Walker, Lorde. Who else has been inspiring your current work, either in prose or for the screen?

VBK: I would have to say my most immediate circle for the screen. Chris Mundy. Eli Clark. Mindy Kaling. Justin Noble. It is shameful to say “he/she is so good” because it does it no justice. They are larger than life to me and I could still pinch myself every day that they are a phone call away and don’t mind my asking questions or sharing space with them. I don’t work with Issa Rae or Lena Waithe on a regular basis (although Issa produced Giants), but I also look to their work regularly as far as voice and authenticity. They also make themselves available and I think that is something that they get far too little credit for. How much they help people like me on the climb.  As a prose writer, I still feel like such a novice. Anyone who completes a book from end to end is my hero because they did it. And that is HARD TO DO.

MRM: What projects are on the horizon for you?

VBK: I have a couple of shows in development. I’m writing on Animal Kingdom and College Girls respectively and the Giants movie is in pitch so hopefully, sleep is on the horizon soon.