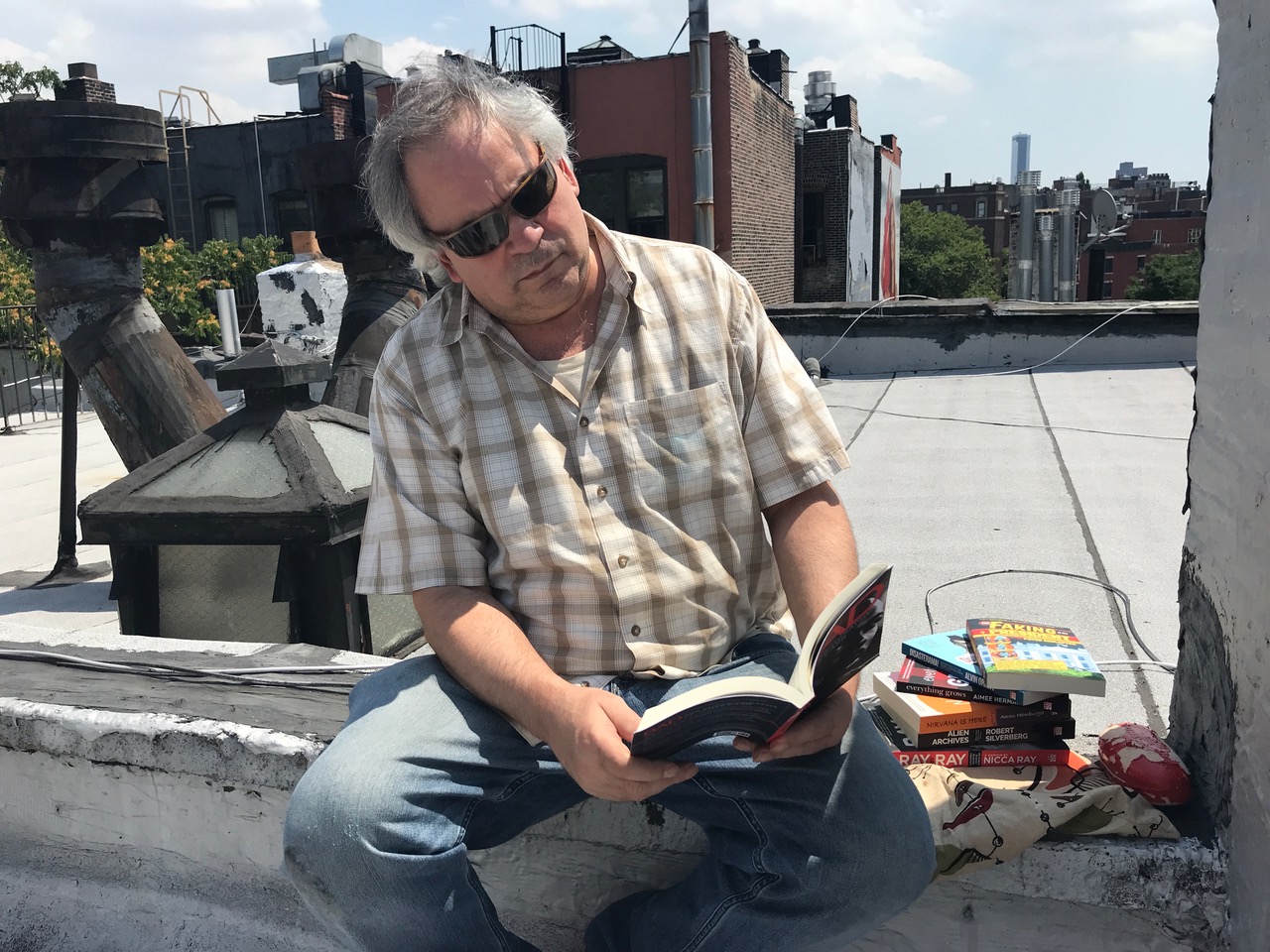 This may be a summer like we’ve never experienced before, but we’ve still got the books for all your small moments of downtime and staycations. We may not be able to have a beach day on the sand, but if you’ve got roof access you’ve got a tar beach all your own. Check out summer of our fantastic short story collections for your quiet moments, delve into another life in one of our beautiful, haunting memoirs, get lost in the mysterious world of crime and noir fiction, and more. Set up a YA book club, or settle into the pages of a good book by yourself. We’ve got books for every reader, and books to connect you and the readers in your life.

Who doesn’t want a getaway on a hot summer day to a gritty city-scape with a mystery to be solved? There are all kinds of getaways in these pages, and it’s never a bad time to get wrapped up in a good mystery. Don’t forget to check out our latest anthology (recently featured in the New York Times!), especially if you need a reprieve from election year stress.

THE FAKING OF THE PRESIDENT edited by Peter Carlaftes

Editor’s Choice, NEW YORK TIMES
A literary coup d’etat, that ponders “What would the White House be like if U.S. Presidents of the past were not restricted by the time-honored hallmarks and traditional behavior of the office, leaving them free to do whatever they wanted, anytime and anywhere?”

Famed detective and mystery writer Lawrence Block (A Walk Among the Tombstones, 8 Million Ways to Die) takes the helm as guest editor for DARK CITY LIGHTS.Twenty-three thrilling, hilarious and poignant short stories–all based in New York City–written by new and acclaimed fiction masters.

When it comes to Florida, no crime is too unusual and no criminal too peculiar to be impossible. Florida is the one state where fiction has to catch up to the headlines, and the contributors to FLORIDA HAPPENS: Tales of Murder, Mayhem, and Suspense from The Sunshine State do not hold back!

Of course each memoir is an entirely different experience, but isn’t that part of the fun? Whether you’re ready to explore film, punk, and a blast from the Hollywood past, journey with a man and his best friend through the heartbreak of the AIDS crisis, or dive into a first-hand account of the American prison system, we know each one of these memoirs is an experience worth having.

2020 LAMBDA LITERARY AWARD FINALIST
The true story of Alvin Orloff who, as a shy kid from the suburbs of San Francisco, stumbled into the wild, eclectic crowd of Crazy Club Kids, Punk Rock Nutters, Goofy Goofballs, Fashion Victims, Disco Dollies, Happy Hustlers, and Dizzy Twinks of post-Stonewall American queer culture of the late 1970s, only to see the “subterranean lavender twilit shadow world of the gay ghetto” ravished by AIDS in the 1980s.

RAY BY RAY by Nicca Ray

Both well-researched and deeply personal, Ray by Ray unravels the lives entangled in Nick’s, including those of Gloria Grahame, Dennis Hopper, John Houseman, and the Ray family itself. Nicca tracks her father’s whereabouts during the years he was missing from her life and works to reconcile his artistry with his persona. In discovering the truth about her father, she navigates her own path beyond the shadows cast by the Golden Age of Hollywood.

An unapologetic, brutal memoir from notorious 60s career criminal James Carr. BAD covers Carr’s life from his first arrest for burning down his school at age 9, through merciless stints in San Quentin, where he shared a cell with famed Soledad Brother George Jackson, through his tragic post-incarceration murder in San Jose in 1972. A savage indictment of the American penal system, this classic release has new significance as part of a growing, urgent demand for criminal justice reform.

Get inspired before heading into the fall with these stories by and about impressive women. Historical or contemporary, these stories will keep you going and growing through the summer months.

LAST BOAT TO YOKOHAMA by Nassrine Azim and Michel Wasserman

Last Boat to Yokohama tells a story of both tragedy and grandeur in the 20th century. It recounts the life and work of Beate Sirota Gordon: the influence of her father, Leo Sirota, one of the greatest pianists of his generation; her secret work ensuring women’s equality while helping to develop the post-WWII Japanese constitution–at the age of 22; her broad influence on hundreds of Western artists such as Robert Wilson, David Byrne and Peter Sellars–who were introduced to leading contemporary Asian music, dance, theater and visual artists through her extraordinary cross-cultural efforts.

A collection of powerful, personal essays from enterprising women around the world who came to the same realization: work shouldn’t have to be painful and demeaning. Armed with an internet connection and plenty of creativity and ingenuity, they prove that it is possible to redefine the nine-to-five work paradigm and create a flourishing career that is flexible and fulfilling outside the corporate structure.

As cofounder of the internationally-known, highly-controversial radical political troupe, The Living Theater, author Judith Malina is one of the leading female countercultural figures of the 50s, 60s, 70s and beyond. In this book, she creates an intimate memoir in a unique format with a collection of personal notes written on every full moon for 50 years from 1964 to 2014.

Ready to travel back in time to your teenage years? Whether you’re a young reader or an older one, these memorable coming-of-age stories keep us coming back time and again.

IndieFab Young Adult Fiction Book of the Year 2015!
Kirkus Reviews Best Teen Books 2015!
In the podunk town of Hawthorne, North Carolina, seventeen-year-old geeks Lula and Rory share everything, until Lula discovers that Rory has secrets not even she knows. Meagan Brother’s piercing prose in this fresh LGBT YA novel speaks to anyone who has ever felt unwanted and alone, and who struggles to find their place in an isolating world.

Set in rural Tennessee, QUIVER, a YA novel by Julia Watts, focuses on the unlikely friendship between two teens from opposite sides of the culture wars.

“Quiver is an amazing, heartfelt book with a powerful lesson to share. Nearly all young adults feel judged or excluded at some point in their lives; this story will help anyone, no matter their situation, see that acceptance is possible.”
―Foreword Reviews, starred review

EVERYTHING GROWS by Aimee Herman

WINNER, SILVER MEDAL, FOREWORD REVIEWS 2019 INDIE AWARD For Best Young Adult Fiction
Fifteen-year-old Eleanor Fromme just chopped off all of her hair. How else should she cope after hearing that her bully, James, just took his own life? When Eleanor’s English teacher suggests students write a letter to a person who would never receive it to get their feelings out, Eleanor chooses James.

Poetry can be and do so many things, but we can think of nothing better for a contemplative moment in the sun. Sit with the questions these volumes are asking, and let them inspire you to action in politically-charged times.

Today’s war is for the survival of the planet. In Maintenant 14: A Journal of Contemporary Dada Writing and Art, the weapon of choice is Dada. Maintenant 14 creators turn poetry and art into weapons that expose, confront, and lambast policies that have taken the planet to tipping points in the climate system, biodiversity loss, and the risk of social and ecological collapse. The premier journal gathering the work of internationally-renowned contemporary Dada artists and writers, Maintenant 14 offers compelling proof that Dada continue to serve as a catalyst to creators more than a century later.

The book received the 2013 Arab American Book of the Year Award for Poetry, an astounding achievement for a first collection. In addition, Alyan was recently tapped as a finalist in the Nazim Himet Poetry Competition.

CLOSE TO THE TREE by Robert Gibbons

Close to the Tree is the first full-length collection of breathtaking, distinctive poetry from ROBERT GIBBONS, which surpasses his goal of commemorating the treasure of all who went before him. In this unique work, Gibbons paints so many different shades of color it becomes an art exhibit, according to author Leokadia Durmaj. Art curator and historian Marc Primus notes, “The poetry of Robert Gibbons flows from him like a mighty river. It is powerful lyrical, strong and hip.” And teacher/author Miriam Hipsh remarks, “Mr. Gibbons’ poetry is breathtaking in its imagery. His words paint a heart-wrenching canvas and haunt the reader with deeply emotional truth-telling.”