↓
Home→Awards→Julia Watts Honored for Dedication to Writing for Rural LGBTQ Youth
Share This! 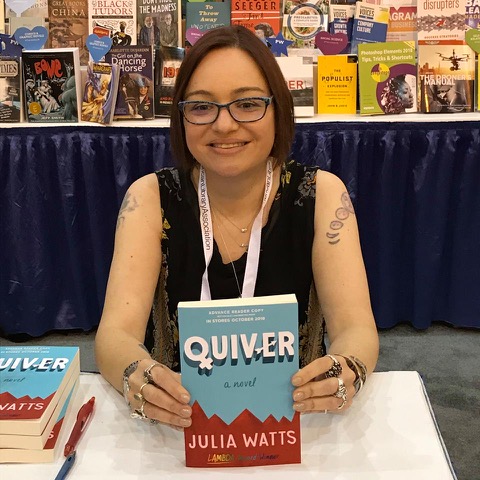 We’re so excited to celebrate with Julia Watts, winner of the 2020 Tennessee Library Association Intellectual Freedom Award! While they are unable to present the award in person as originally planned, the TLA honors Watts for her contributions to the pursuit of intellectual freedom and her continued dedication to writing literature for and about LGBTQ youth in Appalachia.

This prestigious award, which is usually conferred at the annual TLA conference, honors those who work to actively promote intellectual freedom in Tennessee. Previous winners include a Tennessee library director who stood firm against community backlash and personal attacks when a local group booked the library’s meeting rooms for Drag Queen Story Time and a librarian who has worked to educate other librarians and the general public about privacy rights and practices.

Watts’ most recent book, QUIVER, focuses on the unlikely friendship between two teens on opposite sides of a cultural divide in rural Tennessee. A Fall “Okra” Pick by the Southern Independent Booksellers Association and recipient of a Perfect-10 Rating in the Voice of Youth Advocates magazine for librarians, QUIVER offers a close examination of the contemporary compartmentalization of social interactions. The tensions that spring from these teens’ families’ cultural differences reflect the pointed conflicts found in today’s society, and illuminate a path for broader consideration.

The TLA’s recognition of her dedication to exploring the lives of LGBTQ people in small, rural Appalachian towns is well-deserved: Watts is the author of 13 novels for adults and young adults, and has received a Lambda Literary Award and finalist nods for several of her works. We are incredibly proud to work with her, and know there is only more success to come. Congratulations, Julia!