↓
Home→Biography→Happy Book Birthday to RAY BY RAY: A Daughter’s Take on the Legend of Nicholas Ray 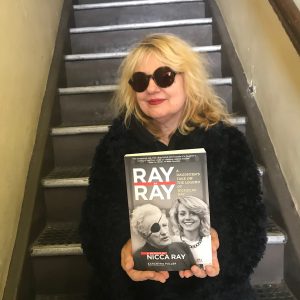 Happy #bookbirthday to RAY BY RAY, Nicca Ray’s intimate, compelling book about the intertwining lives of her  father, legendary film director Nicholas Ray (Rebel Without A Cause), and herself—as a child, a rebellious Hollywood teen, and an adult film director in her own right. This well-researched biography/memoir includes many never-before-published stories garnered from her interviews with family members, Hollywood icons such as Dennis Hopper, Wim Wenders, and Norman Lloyd, as well as her own memories of being the daughter of Hollywood royalty.

We’ll be holding several virtual book launches for the RAY BY RAY, including:

Wednesday, April 29, 8pm EST: Nicca Ray in conversation with LA punk legend Chris D. livestreaming to Facebook and Youtube. Chris D. may be best known for his punk / post-punk groups The Flesheaters and Divine Horsemen. But he has also spent decades as a film historian, specializing in noir and cult movies, as both a teacher, author, and film programmer at LA’s famed Egyptian Theatre. Catch him tonight in a livestream interview with Nicca as they discuss her father’s films, LA punk, and how to remain creatively rebellious throughout your life.

Saturday, May 9, 2pm EST: Nicca Ray in conversation with director Samuel Fuller’s daughter Samatha Fuller (screenwriter and director of A Fuller Life). The daughters of two rebellious Hollywood directors have a lot to discuss: be a part of their first meeting ever. Livestreaming to YouTube and Facebook