↓
Home→Overview→NaNoWriMo, THE GREENFATHER, and You: Producing a Manuscript During National Novel Writing Month 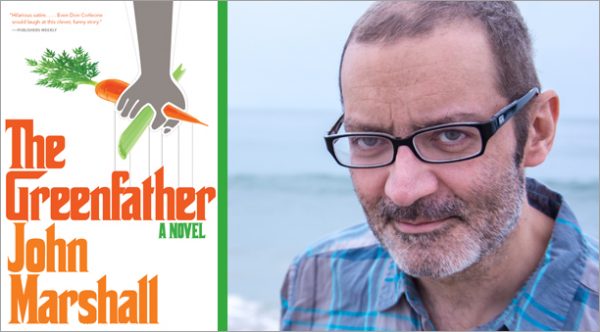 It’s almost the beginning of National Novel Writing Month, when tens of thousands set out to produce a manuscript in the course of one month. The shelves here at Three Rooms Press (and perhaps in your own home) house what started as a NaNoWriMo manuscript: The Greenfather.

For a quick refresher on John Marshall’s The Greenfather: it’s sharp, hilarious, and takes no prisoners, except the ones who are supposed to go there. It goes well with a light salad of radicchio and cherry plum tomatoes. Marshall has spent his life working as a writer for shows such as The Chris Rock Show, Politically Incorrect, Tough Crowd with Colin Quinn, and The Electric Company, as well as regular contributions to publications such as The Huffington Post, MAD Magazine, and Bazooka Joe Comics. Still, he describes the process of novel-writing (not to mention turning out a manuscript in a month) as a difficult undertaking. How did he do it, and how might you?

People make the commitment to this month-long project for many reasons. It ranges from wanting to just finish something creative to those who have a burning idea and need the time to write. Their website has resources from community and accountability check-ins to tools and structure. For Marshall, it kept him honest. As a television writer he had deadlines, yes, but had never written in such a structured way. Prior to producing the Greenfather, he had wanted to attempt NaNoWriMo but hadn’t fully made the commitment.

This time, he had a concept, a loose chapter structure, scenes he wanted to write, and a main character: himself. He wanted a way to comment on the green movement without heavy-handedness or preaching, and he knew he wanted a story following a Godfather. Having grown up in New York, the mob had brushed his own life, and he was inspired by the world of mafia fiction and mob parodies. Armed with all these things he knew he wanted to do, he set himself an assignment. John Marshall wrote for at least two hours at 6am and at least two hours at 10pm every single day for the month of November. By the end of it, he had The Greenfather.

What a Novel Can Be

Each project for NaNoWriMo has unique goals for what their finished manuscript should be. Marshall wanted to break the form and make his book laugh-out-loud funny. Marshall relied heavily on one of his strengths — comedic dialogue—to propel the characters and the plot through granola- and goon-related hi-jinx.

“It was my first novel, and I didn’t know if you could write one like that,” he says, “It came out a little like a TV treatment. It’s almost a stand-up comedy set in novel form, but if I call it a novel, who can tell me I’m wrong?”

He wanted to take a serious topic, one on which he himself has very serious thoughts, and make it as funny as possible. He lampoons the environmental movement, crime, families, and crime families, striking the heart of current issues of dispute between environmentally aware, organic, green supporters and classic, conservative scofflaws of the crime family genre—all with hysterical results. Writing requires structure, yes, but feel free to test it—especially if that plays into your strengths.

What Happens When November Ends?

When the calendar flips to December, you will hopefully have a finished manuscript. On this attempt, Marshall did. He continued writing, however. As the month had gone on, he turned out chapter after chapter and often surprised himself with each addition. He chose to focus the month entirely on creation, however. He did not attempt to rewrite until he was completely finished.

Then he “rewrote the hell out of it.” Marshall says the manuscript we received at TRP was his 25th draft. NaNoWriMo was the kickoff, the accountability, and the structure, and then Marshall kept writing until he had a novel he wanted to submit for publication.

Tips from John Marshall to You