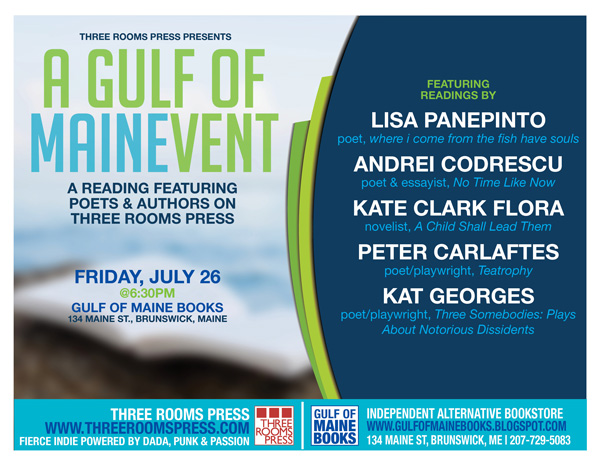 Three Rooms Press and Gulf of Maine Books present A Gulf of MainEvent, a reading of poetry and prose at the wonderful Brunswick, Maine indie bookstore. The reading will start at 6:30 pm on Friday, July 26, and will feature world-renowned poet and essayist Andrei Codrescu, essential Maine-based writers Lisa Panepinto and Kate Clark Flora, plus 3RP co-directors Peter Carlaftes and Kat Georges.

The event is free and open to the public. Gulf of Maine Books is at 134 Maine Street in Brunswick and is a wonderful bookstore — check out this excellent article about the proprietors Beth Leonard and Gary Lawless here.

Andrei Codrescu is a Romanian-American poet, novelist, essayist, screenwriter, and commentator for National Public Radio. He was the Mac Curdy Distinguished Professor of English at Louisiana State University from 1984 until his retirement in 2009. He is the winner numerous awards and honors, including a National Endowment for the Arts Fellowship, the Peabody Award for Road Scholar, the Lowell Thomas Gold Award, and the Big Table Poetry Award. Recent poetry collections include The Art of Forgetting and No time Like Now. His work has also been featured in Three Rooms Press’s annual contemporary dada journal Maintenant.

Lisa Panepinto is a Maine-based poet and indigenous peoples activist. Her critically acclaimed debut poetry collection, On This Borrowed Bike (Three Rooms Press) earned high praise from U.S. Poet Laureate Joy Harjo, who raved, “In these pages Justice falls in love with the blues. There’s scuffling and dancing, and it’s all coming down to what happens in the dark. There is enough love for everyone. Lisa Panepinto sings. You’ll want to be here.” Her latest collection, where i come from the fish have souls was released to acclaim in March by Spuyten Duyvil Publishing.

Kate Clark Flora is the author of more than 14 mystery and true crime books. She has been a finalist for the Edgar Award for Best Fact Crime, and the Anthony Award for Best Critical/Nonfiction Work. Her short story “Michelle in Hot Water” was included in Three Rooms Press’s Anthony award-winning anthology The Obama Inheritance and was praised on NPR’s Fresh Air show as “a truly fabulous story.”

Playwright, poet, and performer Peter Carlaftes is the author of 12 plays and numerous books including the humorous book A Year on Facebook, the poetry collections Drunkyard Dog and I Fold with The Hand I Was Dealt, and the play collections Triumph for Rent and Teatrophy. He is Creative Director and Editor of Three Rooms Press.

Kat Georges is a poet, playwright, theatrical director, performer, and graphic designer. Her books include the play collection Three Somebodies: Plays about Notorious Dissidents and the poetry collection Our Lady of the Hunger. In New York since 2003, she has directed numerous Off-Broadway plays, produced more than 500 events, and performed widely. She is co-director and artistic director of the publishing company Three Rooms Press, a fiercely independent press inspired by dada, punk, and passion.