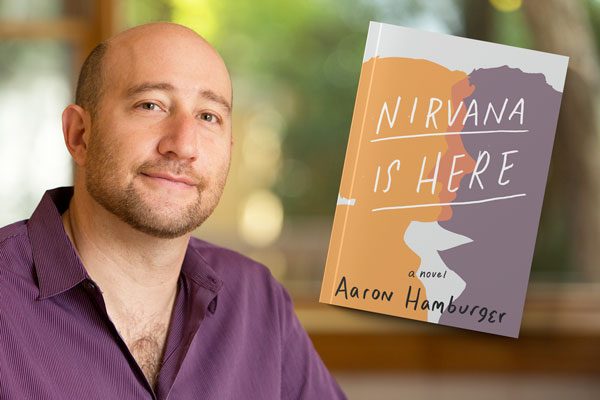 Three Rooms Press is thrilled to celebrate the official #BookBirthday of Aaron Hamburger’s brilliant new novel NIRVANA IS HERE. The new book, years in the making, is a pinnacle of achievement by an award-winning author.

NIRVANA IS HERE deftly intertwines stories of past and present of main character Ari Silverman, who must deal with the reawakened memory of a childhood assault when his present-day ex-husband is accused of assault against a student.

The narrative, placed in a Detroit suburb during the 90s, is set agains a soundtrack highlighted by the music of Nirvana’s Kurt Cobain (see Hamburger’s excellent Washington Post article about Cobain status as a gay rights hero). NIRVANA IS HERE has received universal critical acclaim, with Foreword Reviews calling it “A tender self-reckoning that brings the past full circle,” while the Jewish Book Council hailed its “grit­ty, sar­don­ic edge.”

Aaron will be kicking off a serious of in-store appearances and readings in New York this week that will be followed by a ten-city, cross-country tour. Tour dates scheduled in May include:

More dates throughout the summer: see our events calendar for details.