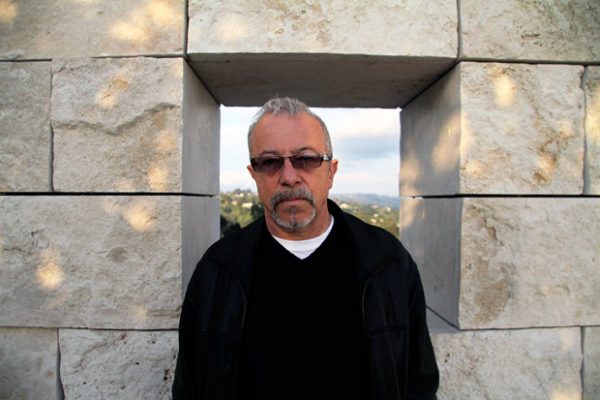 MAINTENANT 13, the latest edition of our critically-acclaimed annual journal of contemporary Dada writing and art, is about to be released.

This issue focuses on the theme of “A.I.: Artificial Ignorance.” If you think artificial intelligence will mark the end of humanity, think again. In today’s world, where is the intelligence? Lying is the norm. Incompetence is rampant. Information is soiled with whatever spin foots the bill.

To delve deeper into the topic, 3RP co-director Peter Carlaftes sat down with world-renowned poet, Dada creator, and NPR commentator Andrei Codrescu for an exclusive interview.

3RP: With the passage of time as a gain in technology we can no longer rebel as the Dadaists once rebelled
yet Dada retains an important place in the history of rebellion.

Codrescu: If Dada was history it would just be stories, another chapter in the curriculum of 20th-century isms. Happily or not, it’s something else, impossible to pin down, and totally with us, especially now at the hybrid crossroads of human and robot. It is, without resorting to metaphysics, a catch in the throat. A breath of shock, surprise, and horror that wells up without warning. Is that man, standing in a field of corpses, about to upchuck his Wienerschnitzel or is he aiming a spitball in four directions at once? Dada, one of the dadaists said at peak Dada in WW1, is a word more potent than God. That is still true, it’s God without metaphysics, God without godliness, without power and without rank. The gasp of Dada, the breath of surprise, is the cry uttered by a human hit by a revelation. The surprised gasp, that’s all. What follows is the effort of the surprised (if they live) to relive the gasp. And later, to figure out what the revelation was. And later yet, to narrate the pre and aftermaths of the gasp. And later yet, to pick at the fine down on the back of the gasp-beast to see if it could be translated as a style. Or translated in any which way, in whatever language, or whatever currency. Putting this in terms of the time-span we all agreed to set our time-pieces to, the first gasp of surprise was the Big Bang, then came a whole lot of still ongoing bang-bangs, birth-bang (or pang), death-bang, electro-bang, e-bang, and badaboom badabang as far as we can imagine. So, take Tzara and the Zurich Dadaists, as an arbitrary point in gasping. What were he and his cohorts gasping about? What was revealed to them vividly enough to make “history”? Well, poison gas for one thing. And the bombs ripping up the empires and the people in them. Technology, which does have a history, marks its milestones with big bangs. Nobody expected the empires to blow up, least of all the people living in them. War, schmwar, thought Kafka when he put his money in the safest possible investment: Austro-Hungarian bonds. Everybody in Europe or in colony management knew that technology was capable of killing them. And everybody gasped when it advanced to kill a little more than they thought. By the time Tzara gasped, Europeans were already mostly robotic: they wore shoes, they lived in boxes, they used wires to communicate, they machined killingry. The hierarchical setup of Empire was a human-based engine engaged in advancing technology. Marinetti’s futurists got high on exhaust fumes but they too gasped when the speed they worshipped killed without any regard for their enthusiasm. Or the dadaists gasped for them. Only hermits and Luddites rang the alarms, and they probably gasped too when they were pulverized. The bang is always a revelation and “Dada!” is the one word that might get out before the meat chunks into the air. Tzara might as well have said “Fuck!,” like millions of others did, but he said “Dada!” instead. For complex reasons having to do with human psychology and with the survival of art (which is the art of surviving), the translation and exchange that followed came to be known as “Dada!” not “Fuck!” But this is simply because Tzara was Romanian, and “Dada” is a double-yes of helplessness calling for Daddy (who is also busy being blown up and helplessly uttering Fuck! to his own daddy). The Dada! revolution did become the Fuck! Revolution for a minute in the 1960s.

3RP: How can you envisage the thrust of Dada regaining momentum today through the use of technology?

Codrescu: Your first question had the interesting phrase “as we gain in technology” in it, so I’ll consider that in the context of the question above. In brief, we “gain in technology” a simulacrum of what we lose in flesh. “Flesh” is a technology, too, though a still mysterious one as of this minute. A minute ago, in let’s say 1916, we didn’t know very much. Now we know how to repurpose flesh (the human material) with CRISPR and other technologies. The replacement “simulacrum” is no longer a mystery: we transplant body parts and we 3D print limbs. If an older technology, a landmine let’s say, blows up your legs, it can be replaced by printed prosthetics. (And soon enough by something very much like flesh). There is a game on in science to locate consciousness, which is deadly serious given that we are experiencing two (seemingly) competing technologies simultaneously: one of them is the tech of evaporation of humans and eradication of life on earth, while the other is the rapidly advancing communication tech that links every brain on earth to the hive mind. If we can locate consciousness anywhere (in the Socratic sense of know thyself) we can understand what it’s up to. And then we gasp! Dada! I mean, if consciousness is matter working to know itself, does it want to keep knowing or does it want to self-annihilate? Locating consciousness is the first step. Finding out what it wants is another. Does it want to go on or to blow up? If it wants to go on, we have to invent a new technology (math and physics) to grow it big enough to make the (competing) war tech obsolete. If it wants to self-destruct, then we don’t have to do much. Both you and I and our fellow artists come up mostly on the side of going on — you because optimism is the American religion, and I because I was brainwashed by the communists before I could dream like Baudelaire.

3RP: And of course, Dada erupted from the trenches of The Great War –where 40,000 corpses sometimes
piled up daily.

Codrescu: I think I already answered that one.

3RP: And finally–If you really want to upset the balance –Conformity is the new rebellion. Like stacking one side of the deck IS Rebellion. Agree? Disagree? Thoughts?

Codrescu: I don’t know what conformity or rebellion are. All I know is that if somebody hits you hard with a revelation or an explosive, you gasp. Dada! Fuck!