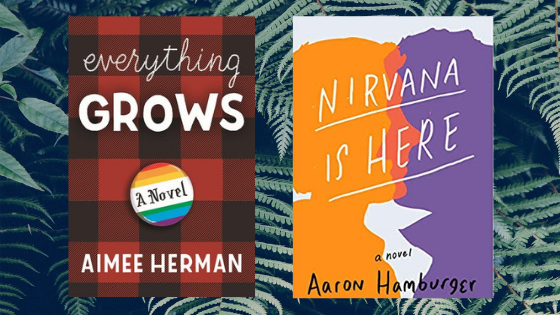 May is an especially marvelous month, as it marks the release of two compelling works of fiction: EVERYTHING GROWS by Aimee Herman and NIRVANA IS HERE by Aaron Hamburger. Aside from sharing a May birthday, both these books tell riveting LGBTQ+ stories, and both were penned by authors who can claim the initials “AH.”

Plus, both will be embarking on great book tours. See Aaron Hamburger’s tour dates here and Aimee Herman’s tour dates here. There’s also been quite a bit of buzz for these new releases. Hamburger recently wrote about the influence of Kurt Cobain on his own life in the Washington Post. Bomb magazine just conducted an in-depth interview with Herman.

There are some differences: NIRVANA IS HERE will appeal to an adult audience, whereas EVERYTHING GROWS is meant for the young adult subset.

Booklist called EVERYTHING GROWS: “Sensitive and informative.” The Kirkus Review raved about its “page-turning prose [and] great beauty.”

Critics loved NIRVANA IS HERE too. Foreword Reviews called it “a tender self-reckoning.” After Birth author Elisa Albert praised it as “compulsively readable, charming, and suffused with deep humanity.”

To read more about these exciting releases check out: