↓
Home→Overview→MAINTENANT 13: A Journal of Contemporary Dada Writing and Art
Share This! 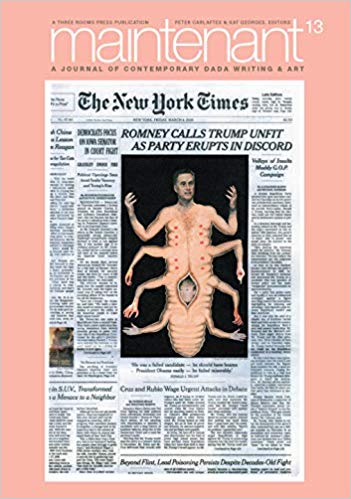 The art movement known as “Dada” began in response to the horrors of World War I as an artistic rejection of logic, reason, and aesthetics of capitalist society. The movement has continued since 1915 in various disguises – Beat, Pop, Punk – and it continues today, as evidenced in Three Rooms Press’ ongoing MAINTENANT contemporary Dada journal series.

The new issue features work that explores the theme “A.I. ARTIFICIAL IGNORANCE.” If you think Artificial Intelligence will mark the end of humanity, then think again. Look at the world around you. Where is the intelligence? Where? Lying is the norm. Incompetence is rampant. Information is soiled with whatever spin is footing the bill. Time to concentrate on exposing the ignorance.

Our journal is inspired by Dada instigator and Three Rooms Press spiritual advisor Arthur Cravan – who created the very first ‘zine in the world with his early 20th century publication of Maintenant and we’re proud to carry on the tradition. In past issues, we have published bold work from Neo-Dadaists around the globe. We are honored to be included in the New York Museum of Modern Art archives, the Smithsonian, as well as museums and galleries worldwide.

Submissions for MAINTENANT 13 are open until December 31, 2018 11:59 AM EST. The link to submit your work is here: https://threeroomspress.submittable.com/submit/126225/maintenant-13-dada-journal-submission