↓
Home→Book Launch→The Dreamachine: The Beat Way to Hallucinate without Drugs 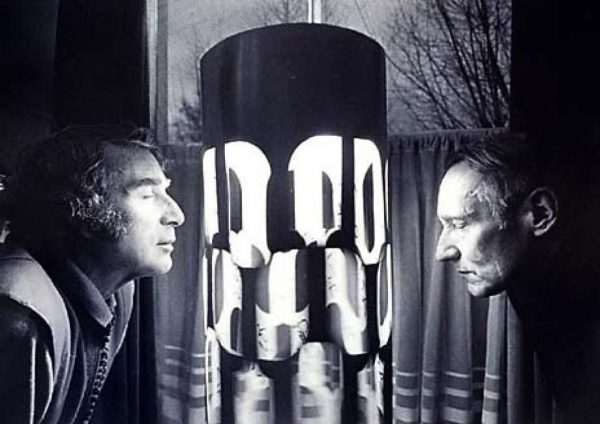 Groovin’ on the Dreamachine circa 1972

“Had a transcendental storm of color vision today in the bus going to Marseilles. . . . I was swept out of time in a world of infinite number. . . . What happened?”

So Brion Gysin described his hallucinogenic experience in his diary in 1958. The experience led him, with William Burroughs and Burroughs’ “system adviser” Ian Sommerville, to create the infamous Dreamachine, a device that causes hallucinations without the use of drugs. You can experience the Dreamachine yourself on Thursday, November 15 at Beyond Baroque in Venice, CA as Three Room Press present the L.A. launch “happening” for our new book DON’T HIDE THE MADNESS: William S. Burroughs in Conversation with Allen Ginsberg. But does it actually work? The answer will surprise you.

What is a Dreamachine?

On that infamous bus trip, Gysin recalls, “We ran through a long avenue of trees and I closed my eyes against the setting sun. An overwhelming flood of intensely bright colors exploded behind my eyelids: a multidimensional kaleidoscope whirling out through space. . . . The vision stopped abruptly as we left the trees.”

Based on that experience he and Sommerville realized that the flickering light was what caused the hallucination. Using a simple turntable (at 78rpm in their time!), they placed a cylinder with holes but into the sides and suspended a light in the middle. Voila! The drug-free trip began.

As Sommerville explains in a letter to Gysin: “You look at [the Dreamachine] with your eyes shut and the flicker plays over your eyelids. Visions start with a kaleidoscope of colors on a plane in front of the eyes and gradually become more complex and beautiful, breaking like surf on a shore until whole patterns of color are pounding to get in. After a while the visions were permanently behind my eyelids and I was in the middle of the whole scene with limitless patterns being generated around me. There was an almost unbearable feeling of spatial movement for a while but it was well worth getting through for I found that when it stopped I was high above the earth in a universal blaze of glory.”

Over the years, the Dreamachine has not lost its appeal. In 1998 the Los Angeles Times called it “the most interesting object” in Burroughs’ Ports of Entry, a visual retrospective at the Los Angeles County Museum of Art.

Three Rooms Press will be featuring a Dreamachine at its November 15 book launch for the new Burroughs/Ginsberg book DON’T HIDE THE MADNESS.  L.A. Based publisher and poet S.A. Griffin, who built the Dreamachine that will be featured at the November 15 event, says “it will operate as a fast car between then and now, now and then. And now and then, if you’re lucky, you might find a bridge emerging out of the musical fog of everything you thought you knew.” As to whether or not it actually works, “it will spin and there will be light, no doubt. But will it transport the participant into another state of consciousness? That is between the individual, the machine and how far their dreams might take them behind closed eyes with an open mind and no borders. I expect nothing and assume that each experience I will have with the transportation device will take me somewhere unique. Quite possibly to found horizons and cool worlds of welcome news.”

Check it out yourself at Beyond Baroque, November 15th at 8pm!