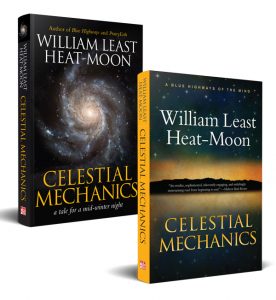 Celestial Mechanics: A tale for a mid-winter night

William Least Heat-Moon’s latest book, Celestial Mechanics: A Tale for a Mid-Winter Night, is an ethereal psycho-geographical thriller and a delicious, page-turning treat. I most highly recommend it to readers who might also be Stephen King fans. The tone of the story is ominous, an unusual and unexpected Heat-Moon reading experience. His classic works are the beloved Blue Highways: A Journey into America (1982), PrairyErth: A Deep Map (1991); River-Horse: The Logbook of a Boat Across America (1999); Roads to Quoz: An American Mosey (2009); and a collection of his short reporting, Here, There, Elsewhere: Stories from the Road (2013).

Heat-Moon’s best-selling classics invariably feature maps at their cores—this one included. Not content to remain static in his writing, Heat-Moon now downshifts his nonfiction career while it is still running at high RPMs (readers per minute) into his new novel, Celestial Mechanics.

“The story is built on the ancient and crucial struggle to control dominance of self over otherness in order to embrace an existence massively larger than our own tiny assemblage of fourteen-billion-years-old atoms. If that sounds highfalutin, let me tone it down by adding that Celestial Mechanics is a story of ghosts, fata morganas, witchery, disappearances, a maleficent ravine, deep sinkholes—a place where everything hangs on the question of what on earth is really happening?”
—William Least Heat-Moon

The protagonist, Silas Fortunato is a blend of Henry David Thoreau and cosmologist Carl Sagan. Arriving in a small university town, he is an aspiring playwright and amateur astronomer. He has inherited 100 rural, wooded acres known as Old Sachem Hill for the thousand-year-old Indian burial mounds within the isolated property. On it is an old Italianate villa overlooking a deep pond. Atop the house he builds an astronomy platform to observe the celestial vault so clear and distinct in the country sky. On an adjoining farm lives a woman whom Silas espies prowling, almost ghost-like, around the sinkhole pond. When he knocks on the door of the old farmhouse near his place, which he had thought abandoned, he discovers a woman of uncertain years who appears to know about him and his wife. She is congenial and good with strange if oracular observations and says her name is Kyzmyt, an allusion to a Turkish town where her father was born. Her mother, who thought herself a witch, had once owned the house.

He has met an attractive, strong-minded young woman, Dolores, who prefers to go by Dominique. She is an ambitious, assertive, self-centered real estate agent who overwhelms Silas. After they marry, he continues to encounter Kyzmyt, but his wife does not ever see the woman, although she thinks she twice sees a young girl, wearing a wet pinafore, standing silently within the house before disappearing. With no interest in astronomy, Dominique refuses to climb up to the star platform, but on a visit to the Hundred her younger sister, Celeste, joins Silas for a night of celestial observations. Curious where Dominique is not, Celeste is willing to listen to him speak about the cosmos as a way of discovering in the twenty-first century a basis for living a harmonious life free of magical thinking. When the novitiate asks, “But what about God?” he in effect answers, Why can’t God be all that exists and the empirically provable laws that create and govern existence?

Soon after her sister returns to the convent, Dominique makes a business trip with her boss to Las Vegas, only to apparently disappear in the Nevada desert near the infamous Area 51. Silas goes in search of her, and there this mystery deepens, making its steady and philosophical way toward a resolution adept readers may see as a kind of summation of the ideas and movements inherent in much of Heat-Moon’s previous work. In fact, the publisher, Three Rooms Press of New York, describes it as “a Blue Highways of the mind.”

Celestial Mechanics by William Least Heat-Moon is in hardcover, paperback, and ebook editions on Amazon, Barnes and Noble, and directly from Three Rooms Press.