↓
Home→Dada→We Are All A “Like”: Introducing Our New Dada Journal Maintenant 12 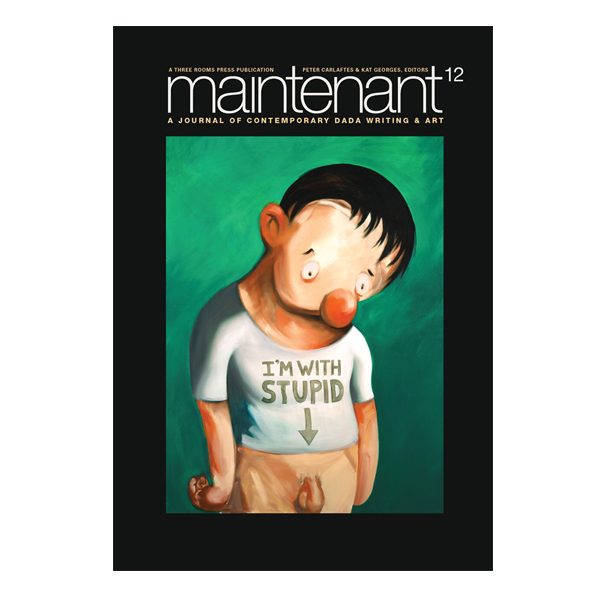 This is a letter to the future. A time capsule with information about the last vestiges of beauty and truth, of meaning without twist, of institutions and the crumbling thereof, of how fast every objective instance is becoming subjective, of how willingly humans are allowing their futures as individual entities to be sucked up into a collective governed by unseen masters whose only goal is the protection for time eternal of themselves and their heirs. Although we are nearing the point where the heirs won’t matter as “life” or something like it turns eternal for the monied few.

Us versus them is a thing of the past when all people believe they are a part of some ever changing entity, malleable and sophisticated, able to represent their so-called personal dreams, which themselves are only random thoughts remixed into reality by the input that has been trafficked their way.

Human brain cells are being implanted In laboratory mice to improve performance  on certain tasks. These cells cells are sourced from embryonic stem cells. Are the stem cells altered by social media? Are the stem cells gender fluid? Do they have inherent creative energy? Do they dream of freedom? Will they transform into beings able to add, subtract, share photos, establish rules, maintain a social construct, bet on sports, dream of freedom?

This is a dream. This construct, constructed to battle nightmares in which all human endeavor is rated on a star system, the quality of all creation is determined by yes or no. Where the corporeal human is increasingly unnecessary. The selfie—a last chance to document the body, while providing data, visual and specific, to determine the perfect body and eliminate variation, distinction, and differentiation.

The influencers provide entertaining distraction, while we rally behind one cause or another on a dance floor packed with causes. Who’s really driving this soul train? And what can we do to stop it?

Maintenant is now. Maintenant is the head-on collision that offers a chance to confront and rearrange the now we have come to accept. The dirty dozen issue, Maintenant 12, themed “We are all a ‘like’” unshackles us from the new standard protocol of description and shines a light on a global artistic nation, ready to defend the need to create without reason.

Dig in and dig it.