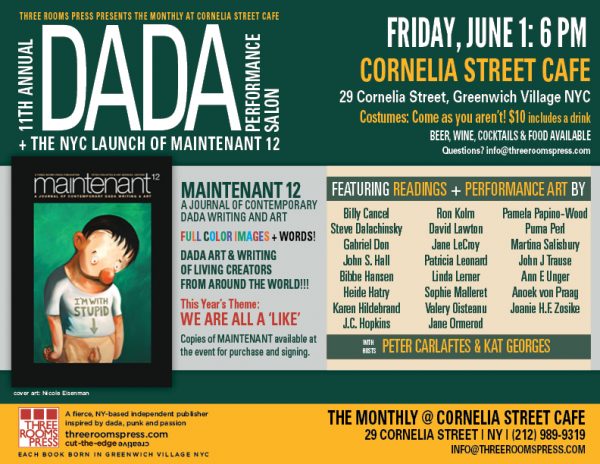 Prepare for an evening of disruptive, challenging and controversial art and writing as Three Rooms Press celebrates The 11th Annual DADA Performance Salon at Cornelia Street Cafe. The event will feature performances by modern day Dadaists whose work continues the spirit of the avant garde art movement sprung from the horror of World War I. The event will also celebrate the launch of Maintenant 12: A Journal of Contemporary Dada Writing and Art, published annually since 2008 by Three Rooms Press.

MAINTENANT 12: A Journal of Contemporary Dada Writing and Art serves up the controversial theme, “WE ARE ALL A ‘LIKE’.” With the rise in social media use—and abuse—the concept of “like” has reached whole new levels. There’s the idea of an individual’s reaction to events, people, images, etc. as a reduction to “Like” or “Dislike” without need for deeper consideration. Then there is the status factor: that something which is “Liked” by the largest number of people is of value. In fact, in the social media orbit, it is seemingly beneficial to offer strong, sharp, simplistic opinions—instead of nuanced, deeper, shaded considerations—simply because they provoke the greatest likelihood of widespread attention. How will this reduction of thought shape the future of interpersonal relations, intellectual advancement, and politics? As we teeter on the brink of nuclear war, the concept of Dada brilliantly encompasses the urgency of present times with both clarity and purposeful confusion.