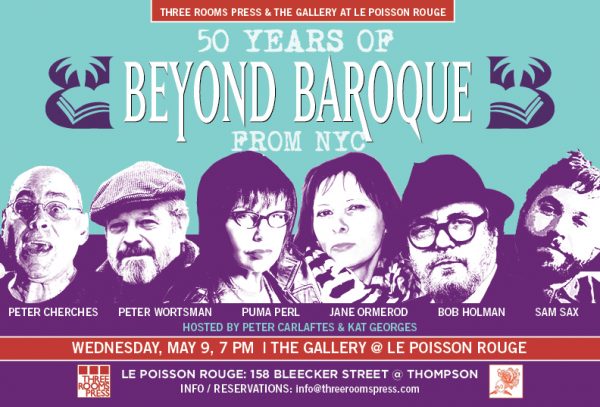 The event takes place Wednesday, May 9, at 7 pm, in The Gallery at Le Poisson Rouge, 158 Bleecker Street and Thompson. Admission is free. For more information and reservations, email info@threeroomspress.com.

Peter Cherches is a native Brooklynite whose writing has appeared in the anthologies Poetry 180 and Up Is Up, But So Is Down: New York’s downtown literary scene, 1974-1992, and in a wide range of magazines and journals, including Harper’s, Semiotext(e), Transatlantic Review, Fiction International, and Bomb. Sonorexia, the avant-vaudeville music-performance group he co-led with Elliott Sharp in the 1980s, appeared at such legendary venues as The Mudd Club and CBGB.

Jane Ormerod is the author of the full-length poetry collections Welcome to the Museum of Cattle and Recreational Vehicles on Fire (both from Three Rooms Press), and the chapbook 11 Films (Modern Metrics/EXOT Books). Her work also appears in publications including Maintenant, AND/OR, Marsh Hawk Press Review, Post (BLANK), Sensitive Skin, The Nervous Breakdown, and Paris Lit Up. Born on the south coast of England, Jane now lives in New York City and performs extensively across the United States and beyond. She is Founder and editor of the award-winning New York publishing hour great weather for MEDIA.

Puma Perl is the author of Retrograde (2014, great weather for MEDIA) a full length collection of poems described by former MC5 manager John Sinclair as “a true contemporary masterpiece.” Previous books include knuckle tattoos (2010, erbacce Press) and two chapbooks, the award-winning Belinda and Her Friends and Ruby True.  In 2016, she was awarded an Acker Award. She is founder and curator of the bi-monthly show Puma Perl’s Pandemonium, which brings together poetry with rock and roll. As Puma Perl and Friends, she performs regularly with a group of excellent musicians.

Bob Holman is an American poet and poetry activist, most closely identified with the oral tradition, the spoken word, and poetry slam. As a promoter of poetry in many media, Holman has spent the last four decades working variously as an author, editor, publisher, performer, emcee of live events, director of theatrical productions, producer of films and television programs, record label executive, university professor, and archivist. He was described by Henry Louis Gates Jr. in The New Yorker as “the postmodern promoter who has done more to bring poetry to cafes and bars than anyone since Ferlinghetti.

Peter Wortsman is the author of work in multiple modes, including a previous book of short prose fiction, A Modern Way To Die (1991); a travel memoir, Ghost Dance in Berlin, A Rhapsody in Gray (2013); and a novel, Cold Earth Wanderers (2014). He collaborated with artist Harold Wortsman on an artists’ book, it-t=i (2004) and with photographer Jean-Luc Dubin on a photo essay New York, NY 1978 (2016). A former Fulbright and Thomas J. Watson Foundation Fellow, Wortsman is the recipient of the 1985 Beard’s Fund Short Story Award and the 2008 Geertje Potash-Suhr Prosapreis of the Society for Contemporary American Literature in German.