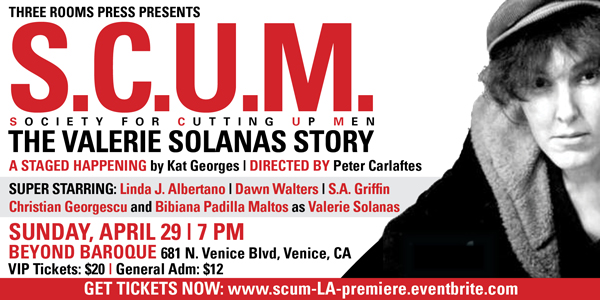 The radical ideas of Valerie Solanas explode in “S.C.U.M.: The Valerie Solanas Story,” a play by Kat Georges, directed by Peter Carlaftes. The work will receive its Los Angeles premiere in a staged happening at Beyond Baroque in Venice on Sunday, April 29, 7pm.  Tickets available at https://scum-LA-premiere.eventbrite.com.

Solanas, author of the notorious S.C.U.M Manifesto—which foreshadowed the #metoo movement 50 years ago—shot and seriously injured famed pop artist Andy Warhol on June 3, 1968. The play explores Solanas’ radical views through the lens of a Factory “happening” featuring a cast of “Superstars,” art critics, and outsiders. Furiously-paced and punctuated with slicing humor, whip dances, and anarchist ideals, “S.C.U.M.” cuts through façades to capture the spirit and value of artistic imagination.

A Three Rooms Press production, “S.C.U.M.: The Valerie Solanas Story,” is the opening play in Georges’ THREE SOMEBODIES: Plays About Notorious Dissidents (978-1-941110-54-6; Three Rooms Press; March 2018; $19.95), a trio of fascinating, cutting edge plays inspired by people who shook up the world—for better or worse. In addition to “S.C.U.M,” the collection includes “Art Was Here,” inspired by poet-pugilist and Dada precursor Arthur Cravan, and “Jack the Rapper,” a mash-up of Jack the Ripper and T. S. Eliot. Copies of the book will be available at the reading for purchase and signing.

A limited number of VIP tickets are available for $20, and include premium seating and an autographed copy of THREE SOMEBODIES. General Admission is $12. Tickets may be purchased in advance at http://scum-la-premiere.eventbrite.com

For additional information, including a review copy of the play and assistance with interviews, please email info@threeroompress.com.