↓
Home→Book Launch→013018: Washington DC State of the Union Resistance with THE OBAMA INHERITANCE 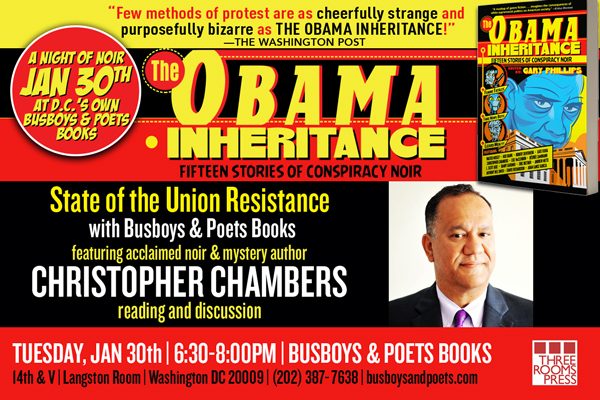 As a counter and artistic response to Donald J. Trump’s First State of the Union Address a mere 2 miles away, Busboys and Poets Books presents a night of noir, pulp, sci-fi and resistance–all tied up in THE OBAMA INHERITANCE: 15 Stories of Conspiracy Noir, the recent award-winning anthology curated by editor and renowned crime novelist and activist Gary Phillips, featuring stories by Walter Mosley, Robert Silverberg, Nisi Shawl, Kate Flora, Christopher Chambers and more. As the Washington Post raves, “Resistance takes many forms, particularly in the current political climate. Few methods of protest are as cheerfully strange and purposefully bizarre as THE OBAMA INHERITANCE.”

The event takes place Tuesday, January 30, 6:30-8pm, at Busboy and Poets Books Langston Room, 14th and V, Washington, D.C. The evening will feature a reading and discussion by Washington, D.C. native Christopher Chambers, a Professor of Media Studies at Georgetown University who is the author of four fiction novels and editor of two fiction anthologies.

Copies of THE OBAMA INHERITANCE will be available for purchase and signing before and after the event.

THE OBAMA INHERITANCE, which NPR’s Fresh Air called, “a collection of 15 stories so sly, fresh and Bizarro World witty, they reaffirm the resiliency of the artistic imagination,” was conceived in the tradition of satirical works of Swift and Twain, with nods to the likes of William S. Burroughs and Philip K. Dick. It contains stories featuring vigilante First Ladies, Supreme Court judges who can clone themselves, gear-popping robots of doom, and races of ancient lizard people revealing their true master plan–all mashed up in the blender of fake news bots, climate change hoaxes, and outlandish lampoons of the most bizarro conspiracy theories heaped on the 44th President…some spun by the 45th President himself!